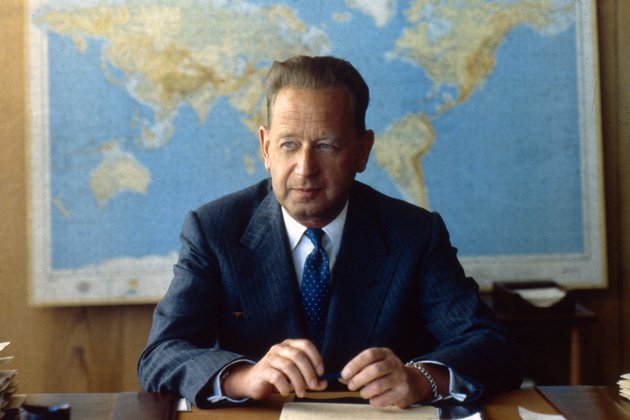 Democratic South Africa has skeletons in the closet that it needs to address. One of these is the death of Dag Hammarskjöld, the Secretary-General of the United Nations (UN) in a plane crash shortly after midnight on 17 to 18 September 1961. The plane went down as it approached Ndola, a mining town in Northern Rhodesia (today's Zambia) bordering the Congo.

On board were 15 other people. Hammarskjöld planned to meet Moïse Tshombe, leader of the secessionist Katanga province, to find a solution to the conflict in the Congo. All but one, Hammarskjöld's bodyguard Harold Julien, died. He succumbed to his injuries six days later in a local hospital. He could have been saved if treated properly. His eyewitness report was also neglected.

Foul play has never been eliminated. Hammarskjöld had engaged in crucial negotiations bringing the secession of the Katanga province to an end. This was followed with concerns by Western interests. His engagement in the decolonisation of Africa provoked dismay among the white minority settler regimes. The crash, therefore, immediately provoked suspicions that it was not an accident. As recently as September 2019, Antonio Guterres, the current UN Secretary-General stated in a letter to the General Assembly:

New evidence substantiates the early suspicions of possible foul play. This means a UN Secretary-General and those in his company were possibly the victims of an attack in air. This ought to be verified.

Apartheid South Africa had interests in the region and followed closely the events unfolding in the Congo. It must be taken for granted that there are records, which offer additional information to verify assumptions. But access to classified documents needs a state's active support.

Fifty years after Hammarskjöld's death, the Zambian-born scholar Susan Williams published a book which pointed to omissions, flaws and failures of the earlier investigations. It triggered a new inquiry conducted by an independent commission of jurists. It submitted a report in 2013, which concluded:

As a result, official investigations by the UN resumed. The United Nations Association Westminster Branch in London has provided regular updates on developments since then.

In 2017 the former Chief Justice of Tanzania, Mohamed Chande Othman, was appointed as Eminent Person, tasked with further investigations. He concluded in his first report that

Justice Othman identified "the continued non-disclosure of potentially relevant new information in the intelligence, security and defence archives of member states" as "the biggest barrier to understanding the full truth" about what happened.

He stressed that it depends on the UN member states to become active in the search for further evidence in their national archives. The burden of proof had, therefore, shifted to them. They should show that they have conducted a full review of records and archives in their custody or possession, including those that remain classified, for potentially relevant information.

In support of Othman's report, Guterres in 2017 recommended

The UN General Assembly extended Othman's mandate in early 2018. He presented his second report in September 2019.

These had the logistics and necessary conditions (suitable planes and airfields) to intercept with the plane approaching. For Othman

New information also confirmed that the crash site was discovered much earlier than officially reported - and testifies to the deliberate neglect of the only survivor. As Othman notes, this

Othman based his conclusions partly on reports of the independent, high-ranking official appointed by several UN member states. But, states such as South Africa, the US and the UK, where most discoveries could be expected, did not comply.

A challenge to South Africa

South Africa subsequently assigned a high-ranking official at its foreign relations department in May 2019 with the task to look into potential sources, which could offer new information. But no report has so far been submitted.

On delivering his most recent report, Othman recommended:

that an independent person is appointed to continue the work;

that key member states again be urged to (re)appoint independent high-ranking officials to determine whether relevant information exists within their security, intelligence and defence archives;

that a conclusion be reached over whether member states have complied with this process;

that key documents be made public.

In December 2019 another Swedish draft resolution was adopted to extend Othman's mandate, with a record number of 128 co-sponsoring countries, including South Africa, out of the UN's 193 member states. Once again, the resolution was not supported by the US and the UK.

It is one thing for the US and the UK to be unwilling to assess and disclose classified material. It's quite possible that they want to avoid any embarrassment.

But South Africa has no reason to want to hide anything. There were plausible reasons for the apartheid regime's refusal to cooperate with the probe into Hammarskjöld's death. But these no longer stand under a democratic government.

It is inconceivable that the country's archives contain no information on what happened at Ndola. Concerned about apartheid, Hammarskjöld had visited South Africa in early 1961. South African agencies and individuals played an active role in the region. This needs to be more closely investigated.

U.S.-India trade deal not expected during Trump visit next week

WASHINGTON, DC - President Donald Trump has signalled that a "big trade" deal might not be on the agenda during ...

NEW YORK, New York - Wall Street was sharply weaker on Tuesday, joining a global meltdown in stocks. Only the ...

HONG KONG - HSBC, the largest of Hong Kong's three currency-issuing banks, said on Tuesday it plans to cut as ...

NEW YORK, New York - Amazon founder Jeff Bezos says he will give $10 billion of his own money to ...

Whereabouts of concelebrating priests not established at Pell trial

Dr Chris Friel examines another of the many concerning aspects of the child sexual abuse case against Cardinal George Pell.This ...

It is a craven, indefensible choice. On Tuesday, European Union foreign ministers agreed to launch a mission in the Mediterranean ...