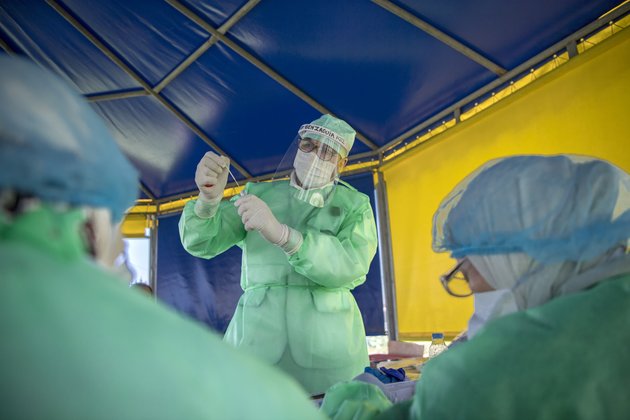 The U.S. death toll from the COVID-19 pandemic topped 100,000 on Wednesday afternoon, the highest in the world by far and nearly one-third of the more than 350,000 deaths around the globe.

As the U.S. went past the grim milestone, U.S. President Donald Trump defended his handling of the crisis and accused the news media and Democratic politicians of spreading disinformation about his response.

"The Radical Left Lamestream Media, together with their partner, the Do Nothing Democrats, are trying to spread a new narrative that President Trump was slow in reacting to Covid 19," Trump said in a Twitter post Wednesday. "Wrong, I was very fast, even doing the Ban on China long before anybody thought necessary!"

Trump's reference to China involved his January 31 decision to prohibit non-U.S. citizens from traveling from China while allowing American citizens and permanent residents to continue as long as they were subject to screening and the possibility of a 14-day quarantine.

Meanwhile, the global milestone comes as South Korea announced Wednesday its highest number of new cases in 49 days. Authorities focused on testing workers from e-commerce giant Coupang after dozens of cases were linked to a company site outside Seoul.

South Korea's Centers for Disease Control and Prevention said all but four of its 40 new cases were in the Seoul area. The country was an early hot spot for the coronavirus outbreak but now barely ranks in the top 50 in terms of confirmed infections, according to statistics compiled by Johns Hopkins University.

Brazil has emerged as a major source of concern, trailing only the United States in the number of infections. On Tuesday, it reported the most single-day deaths in the world, with 1,039, its fifth consecutive day atop the grim list.

Mexico also reported troubling escalations in its coronavirus outbreak, with a new high of 501 deaths and 3,455 new confirmed cases.

Like many governments around the world, Mexico is weighing continuing stay-at-home and social distancing orders against the desire to resume economic activity.

President Andres Manuel Lopez Obrador told reporters his advisers were discussing possible reopening steps and could announce as early as this week plans to allow students to go back to school. He also said he planned to tour states and confer with local officials on easing restrictions.

In the United States, governors continued to pull back on their lockdown orders, including in Nevada, where Governor Steve Sisolak announced casinos in Las Vegas could reopen June 4. The key industry has been shut down for 10 weeks.

"We welcome the visitors from across the country to come here, to have a good time, no different than they did previously, but we're going to be cautious," Sisolak said.

New Zealand reported a new milestone in its coronavirus recovery, saying Wednesday that there were no more COVID-19 patients in the country's hospitals. Health officials said there were only 21 active cases in New Zealand, which put in place a strict five-week lockdown before slowly easing the measures in late April.

New Zealand and Australia are working on plans to amend their travel bans to allow people to move between the two countries, and New Zealand Prime Minister Jacinda Ardern said a draft should be ready by early next month.

The European Union, meanwhile, has proposed an $825 billion recovery fund to help countries cope with a recession sparked by the pandemic. The proposal comes as the world's largest trading bloc enters the deepest recession in its nearly 30-year history.

The pandemic has taken a heavy financial toll on young employees worldwide, according to the U.N.'s labor agency.

The International Labor Organization said Wednesday that more than one in every six young workers had stopped working during the pandemic, and it warned of long-term repercussions that could lead to creation of a "lockdown generation" if action was not taken to mitigate the crisis.

There were over 5.6 million confirmed cases and nearly 355,000 deaths worldwide as of late afternoon Wednesday EDT, according to Johns Hopkins University statistics.

SYDNEY, NSW, Australia - An extended rally in shares in mainland China lifted spirits across the Asian region on Thursday.Gains ...

QUEZON CITY, Philippines (PIA) -- Despite the global economic recession brought about by the COVID-19 pandemic, the Philippine economy remains ...

U.S. stocks on a roll, Nasdaq at new record high

NEW YORK, New York - Despite the number of Covid-19 cases in the United States topping 3 million on Wednesday, ...

In the past month, there's been an outpouring of support for Black Lives Matter from America's largest corporations.You might have ...

NEW YORK, New York - Stocks in Asia were mostly on Wednesday, in line with the sell-off globally a day ...

Vouchers instead of refunds in case of canceled flights disappoint

Attack on Japanese base in 1938 carried out by Soviets, not U.S.

In 1938, the Americans took credit for an unprecedented Soviet air raid on a Japanese air force base in Taiwan ...

TEHRAN (Tasnim) - China on Wednesday defended the World Health Organization and lashed out at the US decision to withdraw ...

Bullying of International court and Bank of England laid bare

On January 9, 2020, Ambassador Karen Pierce-the United Kingdom's permanent representative to the United Nations-spoke at a meeting on the ...

Countries across the globe re-thinking reopening as coronavirus surges

As coronavirus cases around the world approach 11.5 million, governments are struggling with how to reopen their economies, leading some ...

North Dakota pipeline supported by Trump ordered to be closed

A U.S. federal judge ruled Monday that a controversial pipeline that runs through Native American lands in North Dakota be ...