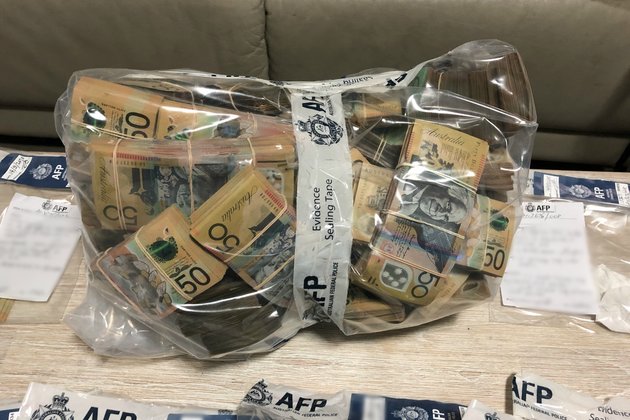 A 28-year-old Queensland man and a 37-year-old West Australian man have been charged in relation to the importation of methamphetamine into Australia.

The investigation commenced after Australian Border Force (ABF) officers intercepted a package from Malaysia at a Perth air cargo depot on 26 July 2020.

The consignment was described as flat pack shoe racks and shelves and addressed to a residence in the South West city of Bunbury.

An x-ray of the package revealed anomalies, and an ABF drug detector dog subsequently gave a positive reaction. What appeared to be a 'gap filler' like material was spilling out of the ends of some of the shelf legs.

It will be alleged that when officers deconstructed the legs they located approximately two kilograms of a crystalline substance which returned a presumptive positive test result for meth.

Four days later (30 July), a second identical package, this time addressed to a Perth residence, was intercepted by ABF officers at a different air cargo depot. They allegedly found another two kilograms of meth concealed in furniture legs.

On 31 July a third package from Malaysia was examined by ABF officers in Brisbane. They allegedly identified meth weighing approximately 1.8kgs in eight furniture legs.

That matter was referred to the Australian Federal Police (AFP) in Queensland.

On Monday afternoon (14 September 2020), AFP officers conducted a search warrant at a home in the Logan City suburb of Hillcrest, where a 28-year-old man was arrested.

If convicted, the maximum penalty for these offences ranges from 20 years to life imprisonment.

Several items of interest, being furniture parts, were seized from the vehicle. It will be alleged that these furniture parts contained a total of approximately two kilograms of methamphetamine concealed within them. A 37-year-old man was arrested.

On the same day, WAPF and AFP detectives executed a search warrant at the man's residence in Newman Street, Glen Iris (Bunbury), where it will be alleged similar items were located, which contained approximately two kilograms of methamphetamine.

It will be further alleged the same man attempted to take possession of similar items on Sunday, 26 July 2020, which also contained approximately two kilograms of methamphetamine.

A 37-year-old man from Glen Iris has been charged by WA Police with:

He is next due to appear in Perth Magistrates court on Tuesday, 20 October 2020.

AFP Detective Acting Superintendent Stephen Jay said the arrests were an example of a coordinated effort by the AFP, ABF and WAPF.

"Working with our Commonwealth and state partners, we will outsmart you. We are united in protecting our community by stopping harmful drugs like meth from reaching Australian streets," Detective Acting Superintendent Jay said.

"Our officers have seen every creative concealment imaginable, and as a result constantly expect the unexpected," Acting Commander Horrocks said.

"They use cutting edge detection equipment as well as our highly trained dogs to prevent harmful drugs from making their way into Australia.

"This outcome again demonstrates the highly effective collaborative manner in which the ABF, AFP and state police work together to protect the community."

"Together we will continue to target both domestic and international serious and organised crime groups who attempt to flood our community with harmful illicit drugs," Detective Superintendent Longhorn said.

"Our sharing of intelligence and coordination of investigations across borders continues to deliver results for our community and we remain committed to identifying and prosecuting those people involved in the illicit drugs trade, in this instance approximately 6kg of Meth was prevented from reaching the streets of Western Australia."

Media are encouraged to include help-seeking information in stories about illicit drugs to minimise any negative impact on people in the community. The following services provide people with access to support and information.

For free and confidential advice about alcohol and other drug treatment services call the National Alcohol and Other Drug Hotline on 1800 250 015.

For information about drug and alcohol addiction treatment or support, go to the Turning Point website.

Images from this operation can be downloaded from Hightail.

Bank of Ireland to reduce branch network by almost half

LARISSA, Greece: Central Greece was struck by a magnitude 6.0 earthquake on Wednesday, which was also felt in nearby Albania ...

WASHINGTON D.C.: In a bid to create a much greater supply of Coronavirus vaccines, the White House has announced that ...

AUSTIN, Texas: Texas Governor Greg Abbott announced that beginning next week face masks will no longer be needed to be ...

WASHINGTON D.C.: President Joe Biden says he expects there to be enough vaccinations for all Americans by the end of ...

HOLTVILLE, California: An overloaded SUV carrying as many as 25 passengers slammed into a semi-truck in California on Monday, killing ...

ALBANY, New York: New York's new coronavirus-period dance rules will allow some dancing at parties. The state said that when ...

Once Upon a Time ... in Hollywood