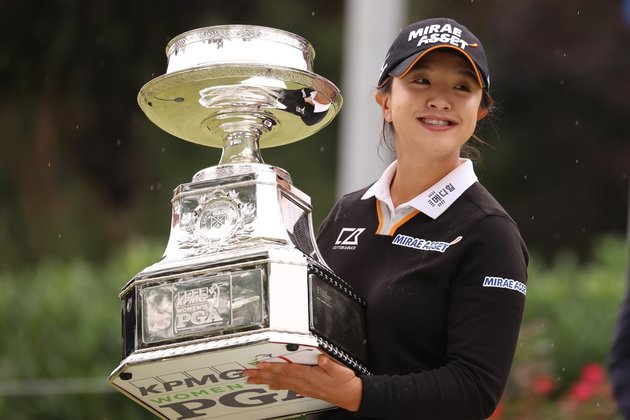 Not even a hole-in-one from her closest competitor could throw Sei Young Kim off stride on Saturday at the Pelican Women's Championship at Pelican Golf Club in Belleair, Fla.

Ally McDonald, playing in the same group as Kim, holed in her tee shot on the par-3 No. 12 to pull to within a single shot of the lead. Kim, from South Korea, responded by notching four straight birdies shortly thereafter to build a five-shot cushion heading into Sunday's final round.

Kim, who won the KPMG Women's PGA Championship in early October in her last start, finished with seven birdies on the day to post the best score of the afternoon with a 6-under 64. At 14 under for the tournament at 196, Kim holds a substantial advantage over second-place McDonald (9 under) going into the final round.

"I keep saying myself 'Okay, just keep going. Yeah, keep going,'" she continued. "I hope [we] play good [against] each other, feed [off] each other until the last hole."

McDonald, who won her first LPGA Tour title last month at the LPGA Drive On Championship, played her eighth straight round under par dating back to the final round of the KPMG Women's PGA Championship.

McDonald had four birdies in addition to the hole-in-one, but also had two bogeys and a critical double-bogey on the par 4 No. 8. Despite those setbacks, she was within one stroke after 12 holes, but Kim pulled away.

"I felt like I played really solid during that stretch. I hit good shots," McDonald said. "Unfortunately, my speed got a little off, especially 16, 17, 18. For a little bit I kind of lost my touch with the putter.

"Yeah, Sei Young, obviously she turned it on those last several holes. ... You just have to give her credit for it for sure. She definitely extended her lead there."

Kim extended her lead on everyone. The United Kingdom's Stephanie Meadow was third at 8 under after a third-round 68 on Saturday. Lydia Ko, of New Zealand, is fourth at 7 under and is seven shots back after a 4-under 66.

In a three-way tie for fifth at 6 under are Austin Ernst (65 on Saturday), Canadian Brooke Henderson (66) and Australia's Minjee Lee (67).

First-round leader Sophia Popov, of Germany, fell all the way back to tied for 15th -- from third -- after shooting a 5-over 75 on Saturday.

SYDNEY, NSW, Australia - Stocks in Asia continued to meander on Friday, while demand for the U.S. dollar continued to ...

Microsoft expanded its esports scope Wednesday, announcing the acquisition of tournament event platform Smash.gg.In a tweet from the MSN_Esports account, ...

Clinical research firm with Irish base prepares for Covid-19 vaccines

U.S. prosecutors are discussing a deal with lawyers for Huawei finance chief Meng Wanzhou to resolve criminal charges against her, ...

Antonio Marcos Diniz was only 13 years old when his family was forced to leave their home near Brazil's Atlantic ...

United States in bid to beef up relationships in Western Hemisphere

This year is on track to be one of the three hottest on record, completing a run of six years ...

The Trial of the Chicago 7

Trial of the Chicago 7