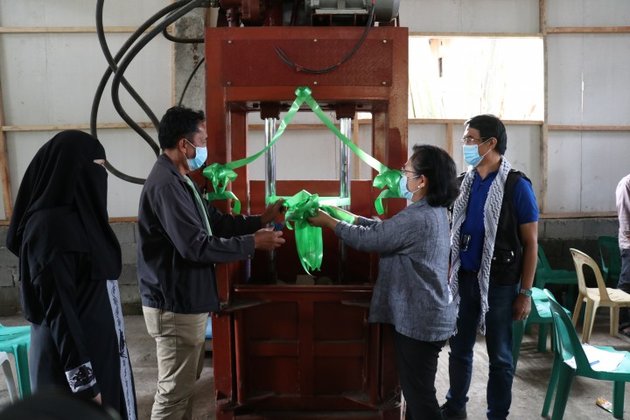 MARAWI CITY, Feb. 20 (PIA) - The Department of Trade and Industry (DTI) as chair of the Subcommittee on Business and Livelihood under the Bangon Rehabilitation Project sustains the abaca production in the municipality of Butig in Lanao del Sur through a formal turnover of Shared Service Facilities (SSF) project to Darul Khyre Farm Economic Development Producer Cooperative.

DTI-10 Regional Director Linda Boniao cleared Thursday, February 18, that the ceremonial turnover is an affirmation that the cooperative has already received the provided equipment, which delivery of such was delayed due to the ongoing pandemic.

She added that the turnover was an extension of the launching of SSF for the plant Tissue Culture Lab in MSU-Marawi which the cooperative can tap to acquire disease-free planting material to boost abaca production.

Boniao also magnified that what the Darul Khyre Cooperative is doing is not just an ordinary production but an exemplary operation paving the way to the generation of money in Euro and other currencies as premium quality abaca is processed to such after being sold to Newtech Pulp, Inc.

[You are thinking that your contribution is only abaca. The number one use of abaca is money... You will appreciate that you have contributed to the world and that contribution is huge because it is money... We are also thanking you because you used instead of neglecting and selling the equipment.]

[We are thinking of the 50 million as to who we are going to give... We also thought to help not just Marawi but also Butig and Piagapo. And so, with DTI, we also allocated for Butig... This is your opportunity, you take care of this. This is your chance. Do not let this pass through.]

Meanwhile, cooperative members conveyed how SSF immensely impacted their abaca production leading them to their sincerest gratitude to the lead implementers of the project.

Currently, the Darul Khyre Farm Economic Development Producer Cooperative has already hit all the indicators to be called successful with the 5% increase in sales and in the number of members assisted. (CRG/ PIA-ICIC)

NEW YORK, New York - U.S. stocks fell Tuesday after a session which saw major indices moving in and out ...

NEW YORK, New York: As lingerie company Victoria's Secret prepares to look for a new owner, the price tag for ...

PLANO, Texas: The head of the nation's third largest chain of cinemas sees an end to the business lockdown which ...

WASHINGTON DC: Speaking to reporters on Sunday, Dr. Anthony Fauci said he would not hesitate to be inoculated with the ...

WASHINGTON DC: Even as the U.S. Centers for Disease Control and Prevention is monitoring outbreaks of the Ebola virus in ...

WASHINGTON DC: The U.S. Centers for Disease Control and Prevention reports that it has distributed 96,402,290 doses of Covid vaccines ...

In 227 to 200 vote, House approves bill to expand protected lands

WASHINGTON DC: An additional 3 million acres of land in the United States will come under federal protection following the ...

FRESNO COUNTY, California: There is new hope for those anxiously awaiting the coronavirus vaccine, as thousands of doses of the ...