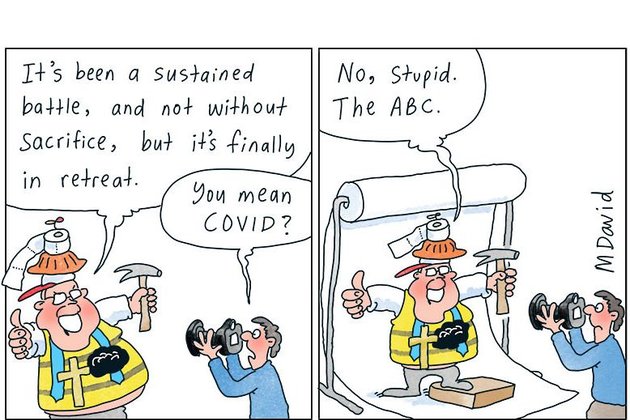 The Coalition seems to have a tenuous relationship with scrutiny.

On the one hand, Liberal Party politicians scream blue murder every time someone from the ALP or the Greens asks a question, demanding that they be censured, made to apologise and preferably, swiftly hanged, drawn and quartered for daring to ask it. And on the other, they insist on a public inquiry every time someone from the opposite side of the political divide so much as sneezes in the wrong direction.

Consider this week's attack - the latest in a perpetual stream of one-armed conflicts - mounted against Premier Dan Andrews, who, it needs to be said, cannot breathe in the right direction as far as the LNP is concerned.

It seems to matter not that Andrews, after endless months of willingly facing scrutiny, via daily media conferences resembling witch trials from The Crucible, has been recovering from a severe spinal injury. This, according to the Victorian chapter of the Liberal Party, is just "proof" of a conspiracy.

According to Victorian Opposition Leader Michael O'Brien - who most Victorians still can't name despite three years at the helm - the conspiracy is that Daniel Andrews' injuries are part of some deep, dark and obviously undisclosed coverup.

A statement released by Victorian Shadow Treasurer Louise Staley demanded the following answers from the Premier to 'the long-suffering people of Victoria' about his injury:

Warming to her subject, Ms Staley further demanded that, apart from answering these incisive questions - on which she had clearly spent laborious thinking time but no time researching answers - Mr Andrews should also be on half-pay.

Not according to Trade Minister Dan Tehan who weighed in with this:

Nonetheless, the baseless scrutiny was answered, as the Premier gave permission to Ambulance Victoria for the details of his personal injury (which would ordinarily remain private for everyone else) to be released.

NO SCRUTINY ON FULL PAY

Now, for anyone who is up to date with the number of Federal Liberal Party MPs who have taken leave on full pay, often citing the "stress" they endured simply for facing - but not actually answering - questions, this may appear a little rich.

Mr Porter went on mental health leave after he was questioned by the media and the Opposition over an alleged brutal rape, following the release of a letter from the victim who is subsequently believed to have taken her own life.

Mr Porter has never faced an inquiry of any kind. The letter has not been released into the public domain. The Prime Minister accepted Mr Porter's denial as conclusive evidence and apparently, even Porter's mobile phone records were accidentally deleted by his nine-year-old son.

No investigation into the alleged crime has been mounted by police.

Said mental health leave due to the stress he endured over being questioned notwithstanding, Porter did manage to find the strength to mount a defamation lawsuit against the ABC and journalist Louise Milligan, for daring to question, well, anything.

In the Morrison Government, it seems, it's not nearly as important to know who knew what happened - or when - in the Brittany Higgins case as it may be to the rest of us.

Ms Reynolds, in whose office the alleged rape of Brittany Higgins occurred, also went on full paid leave. The reason given? Heart problems.

While on sick leave, Ms Reynolds managed to find the strength to call Brittany Higgins a "lying cow".

Ms Reynolds was questioned in Senate Estimates about what she knew, when she knew and why she covered up the allegations of rape in her office, as well as why she chose to question Ms Higgins in the exact place the incident allegedly occurred.

More recently, Reynolds claimed the stress of facing the Opposition's questions over the Higgins case led to her being hospitalised.

To date, no actual answers have materialised from the internal government inquiry into the Higgins matter and no criminal inquiry has been ordered.

Andrew Laming went on full paid leave to learn how not to perv on women and, possibly, how not to be a complete sleazeball. Laming, who was found to have perved on people, taking upskirts of his victims and then harassing them on social media, is believed to be receiving special "empathy classes".

These classes are apparently distinct from the empathy classes the whole of the Morrison Government spent $190,000 on for... well, to learn empathy.

Mr Laming is still a member of the Morrison Government.

Mr Coleman took leave on full pay in December 2019 for undisclosed "personal" reasons. He appears to have quietly returned sometime during 2021, with little fanfare. Mr Coleman declined to answer questions as to the nature of his leave and to date, the reasons for his prolonged, fully paid departure remain unclear.

All the above Coalition MPs refused to answer questions and some even blamed the questions as the reason their leave - on full pay - was required at all.

Perhaps Mr Tehan should be questioned as to whether he sees any of these instances as signs of a not so well-functioning democracy?

In further examples of our deteriorating democracy, the Morrison Government now holds the record for the most instances of gagging their opponents.

According to Manager of Opposition Business Tony Burke:

Morrison Government ministers and their staff also refuse to answer questions during Senate Estimates, taking most questions "on notice". Recent Senate Estimates questions into the internal Higgins Inquiry resembled parody, as ministers and staffers all appeared to know nothing. These were the questions that apparently so upset the delicate sensibilities of Linda Reynolds (of the lying cow comments) that she had to be hospitalised.

To avoid scrutiny from the Fourth Estate, the Morrison Government bullies journalists, takes out defamation lawsuits against them and their organisations, publicly belittles them and even instigates AFP searches of their homes. In the case of the publicly funded ABC, the Federal Government goes as far as monitoring journalists' Twitter feeds and creates intense pressure, which even leads to stories being pulled and journalists, such as Emma Alberici, losing their jobs.

Its famous failure in the Porter defamation case did not stop the Morrison Government from continuing its attempts to silence scrutiny from the national broadcaster, either.

The latest saga involves another Four Corners episode, this time featuring the Prime Minister's alleged ties to the QAnon conspiracy group. While the details are still sketchy, the episode was apparently pulled because the PM refused to answer questions on the issue.

Head Liberal and current PM Scott Morrison has been turning the shutting down of debate and scrutiny into artform since his days as Immigration Minister. That period of his career saw the creation of "on-water matters" - a conveniently conjured up excuse to avoid answering questions about the ill-treatment of asylum seekers, which continues to this day.

Morrison rushes out of press conferences, singles out journalists and belittles them, obfuscates and just refuses to answer questions, in general. When things got too difficult, he has even shut down Parliament.

Of course, much of the above is facilitated by the compliant mainstream media, who are either ideologically onside, as in the Murdoch rags, or bullied into submission, like the public broadcaster.

The punishment for refusing to back down is often swift, even when litigation fails, as in the case of Louise Milligan. Milligan survived the defamation case but the Murdoch media won't be letting her off so lightly, as demonstrated by its latest example of bullying.

Today's Federal Coalition and assorted state Liberals and Nationals are leading the charge against a well-functioning democracy. But don't expect Mr Tehan, Ms Staley, the PM or anyone in the Morrison Government to face any scrutiny about it.

This editorial was originally published as part of the Independent Australia weekly newsletter. These editorials are usually only available to subscribers and may be read online in the IA members-only area.

What is really wrong with our media: The Eden Monaro example