We're losing the vaccination race because of bungling, not bad luck 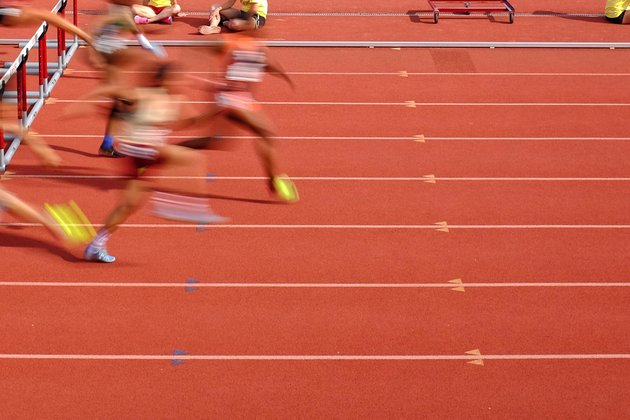 As one big international competition begins, another one is nearing its end. At least we hope so.

I am, of course, talking about the Tokyo Olympic Games and the international roll-out of vaccines against COVID-19.

Australia has been in the top ten in the medal tally at every summer Olympics since 1992. It is projected to again be near the top in Tokyo - certainly on a per-capita basis.

But in the vaccination standings, we are near the bottom of the OECD league.

When it comes to COVID vaccines, Australia has had a shocker. With apologies to the late legendary sports broadcaster Norman May, no one would be exclaiming: "Gold! Gold to Australia! Gold!"

Things are not going swimmingly. If this were a 4x100 metre medley relay, our team would involve the backstroker jumping into the diving pool, the breaststroker veering into the wrong lane, the butterfly swimmer breaking, and the freestyle anchor swimmer sinking.

Unlike other competitor countries, the Australian government failed to buy a broad portfolio of vaccines. It bet on two options - one being developed by the University of Queensland, the other by Oxford University and AstraZeneca - that could be made in Australia. This has proven a mistake.

It didn't ramp up its mRNA vaccine purchasing until very late in the game. Bypassing state governments, it thought it could rely on GPs to deliver the vaccines without paying them properly or appreciating they have limited capacity, do other important things and don't always have the specialist freezers required to store mRNA vaccines.

Australians seemed to have been surprised by the incompetence of our vaccine purchasing strategy and roll-out. With the lockdowns in Sydney, Melbourne and now Adelaide exposing the folly of Prime Minister Scott Morrison's declaration in March that vaccination "is not a race", his approval rating has slumped to its lowest since the pandemic began.

We generally trust our governments - federal, state and local - to do most things reasonably well. Indeed, compared to the rest of the world the "administrative state" in Australia works incredibly well.

From getting a drivers' licence to being treated in a public hospital, enrolling a child in school or obtaining government benefits and assistance, things tend to just "work". Kind of like an Apple product.

Even in wealthy countries with excellent rule of law this is not always the case. Ask anyone who has gone to the Department of Motor Vehicles in a major US city.

Australia's administrative state is built on the hard work and common sense of those who work in the public sector. It has a proud track record.

So why has the vaccination roll-out been so botched? Was it just bad luck? Or are there broader lessons?

The UQ vaccine did look promising, making it to phase 1 clinical trials before it was discovered it produced results falsely suggesting recipients had HIV. It is still in "redevelopment".

AstraZeneca has been associated with a small risk of blood clotting, which has shaken public confidence, and led the governent's health advisers to recommend it only for those those aged 60 or older.

Read more: How rare are blood clots after the AstraZeneca vaccine? What should you look out for? And how are they treated?

This is why smart investors don't put all their eggs in one - or two - baskets. They diversify.

There was a lot more to our vaccine bungles than bad luck. How things turned out depended in large part on what government did. To paraphrase an old golfing saying, the harder you work, the luckier you get.

There are three lessons from the vaccination debacle.

First, the public service is full of great people, but the capacity of government departments has been systematically downgraded over the past few decades.

Both sides of politics must share some of the blame. If we as citizens are appalled by the performance of a health official, then we have to look beyond the person to the office. How did he or she end up there?

Second, far too much of government at a federal level is seen through a purely partisan political lens.

States governments, which live or die largely on the quality of service delivery, are often much better in this regard. Sure, Victorian premier Dan Andrews and his NSW counterpart Gladys Berejiklian are good politicians. But their biggest political asset is their track record in delivering for their states.

Third, short-termism in government thinking is a big problem.

Short-term thinking dulls the powerful electoral incentives that (at least partly) drive politicians to perform. As any economist will tell you, people respond to incentives. But political incentives don't seem to be working very well these days. If voters think short-term, so will politicians.

We don't necessarily need to demand more of government. We should insist political leaders act as if they care about the future - of the country, and the planet - rather than just the next election.

Yes, this is a race

Make no mistake: Australia's response to the pandemic is a competition.

Perhaps watching the Olympics over the next couple of weeks will give our leaders a patriotic shot in the arm, and inspire them to give the rest of the vaccination race their best.

We are counting on them.

To Sleep With Anger