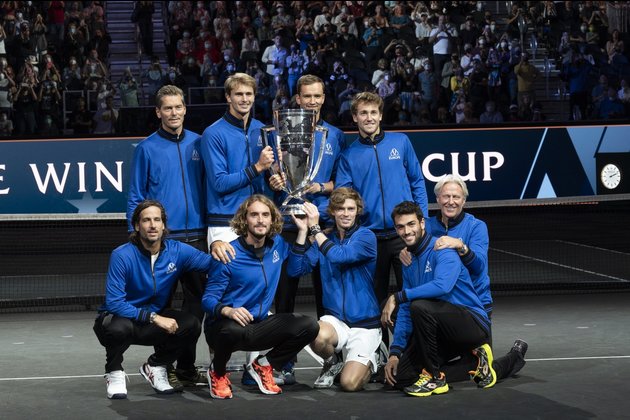 Russia's Andrey Rublev and Germany's Alexander Zverev clinched the triumph with a 6-2, 6-7 (4), 10-3 win in doubles against American Reilly Opelka and Denis Shapovalov of Canada.

Team Europe has won the first four editions of the three-day event. The Europeans' only loss came in doubles on Friday night when John Isner of the U.S. and Shapovalov beat Zverev and Italy's Matteo Berrettini 4-6, 7-6 (2), 10-1.

No. 1 seed Hubert Hurkacz of Poland defeated No. 2 Pablo Carreno Busta of Spain 7-6 (2), 6-3 to win his third ATP Tour title of the season in Metz, France.

Hurkacz, who did not drop a set all week, struck nine aces and converted four of his six break chances in the 82-minute final.

Including his titles earlier this season at Delray Beach and Miami, the 24-year-old Hurkacz holds a 4-0 record in ATP Tour finals.

Kwon saved three set points in the opening-set tiebreak before breaking Duckworth's serve twice in the second set to win in one hour and 38 minutes.

DUBLIN, Ireland: Property prices in Ireland are increasing at double digit rates for the first time in a decade.Since August, ...

SYDNEY, NSW, Australia - Buyers swarmed Asian stock markets on Friday, cashing in on a global rush to stocks.Gains in ...

Many Amazon employees to be allowed to continue working from home

CUPERTINO, California: In a shift from its previous policy that employees would need to be in company offices at three ...

China and Iran court Taliban, while IS aims for chaos

On October 8, a terrible blast struck the worshippers attending Friday noon prayers at the Gozar-e-Sayed Abad Mosque in the ...

BOSTON, Massachusetts: Massachusetts Governor Charlie Baker has announced that he is deploying up to 200 National Guard members to assist ...

ATHENS, Greece: The Greek island of Crete has been hit by a 6.3-magnitude earthquake, just weeks after another quake caused ...

Islamabad Court hears of horrific murder that has shocked the nation

ISLAMABAD, Pakistan - Zahir Jaffer, the son of a billionaire businessman and the prime suspect in Noor Mukadam's murder case, ...

NAYPYITAW, Myanmar - According to locals and sources within the armed resistance movement, the Myanmar military deployed thousands of troops ...

Meteor is suspected in explosion that rocked New England

MANCHESTER, New Hampshire: A meteor could have caused a loud explosion that was heard on Sunday in parts of southern ...

Pirates of the Caribbean: Dead Men Tell No Tales