EU leaders look for united strategy on ties with China, US 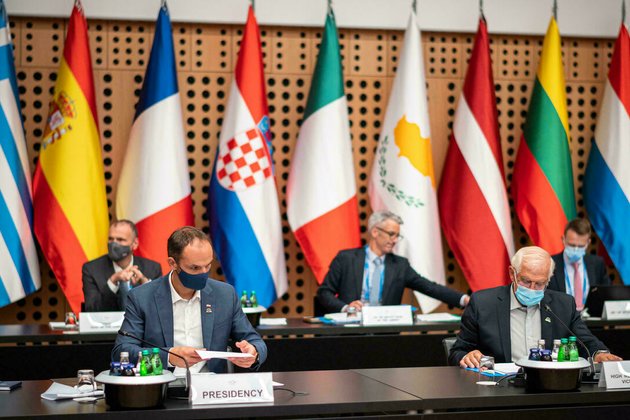 EU leaders are meeting to discuss Europe's place in the world Tuesday as they seek unity on how to approach ties with superpowers China and the US, as well as the western Balkans.

The 27 EU heads of state and government are meeting in a castle at the former Yugoslav republic of Slovenia, which holds the EU's rotating presidency.

It's an informal get-together of the European Council.

"This is the first time leaders have met since June, and with everything that has happened, that seems like ages ago", a senior EU diplomat said.

The EU's six Western Balkan parters, Albania and other former Yugoslav republics North Macedonia, Bosnia, Montenegro, Serbia and Kosovo have been invited to a "working dinner" on the eve of the EU-Western Balkans summit on 6 October.

Over dinner, the leaders are to have a "strategic discussion on the role of the EU on the international stage", according to an invitation letter sent out by EU Council President Charles Michel, who organises the summits.

French President Emmanuel Macron is expected to again warn his partners that Washington's close allegiance to Europe is no longer to be taken for granted, with Paris still smarting over the cancellation of a massive submarine contract to the benefit of the US.

"It would be a mistake to pretend that nothing happened," a French presidency source said ahead of the talks.

France was infuriated last month when Australia cancelled a submarine contract worth 56 billion euros, saying it would instead purchase US nuclear submarines amid rising tensions with China.

EU steps up support for France over Australia submarine spat

EU partners have expressed solidarity with Paris to varying degrees, with Baltic and Nordic countries reluctant to criticise the Cold War superpower that they deem their ultimate protector against Russia.

The subs debacle came weeks after the US pulled its troops out of Afghanistan after two decades, as the Taliban swept to power, catching the Europeans off guard.

Under the auspices of Nato, the Europeans provided troops and were major donors to the overthrown Afghan regime. The EU has warned it will not recognise the Taliban government, made up largely of all-male Islamist hardliners.

The collapse in Afghanistan - on top of the submarine fallout - has given fresh impetus to those pushing for the EU to develop its own military capabilities, with France leading that charge.

German Chancellor Angela Merkel, the EU's most influential leader for the past 15 years, will attend the EU gathering given that coalition talks in Germany following last week's elections have not yet resulted in a government.

As leader of Germany, the EU's export powerhouse, Merkel has also always encouraged close ties with China, but this has also proven harder to defend as Chinese President Xi Jinping's leadership becomes increasingly centralised and hardline.

The relationship with Beijing grew even more complicated when an EU-China investment deal wanted by Germany was indefinitely put on hold after both sides exchanged tit-for-tat sanctions over the treatment of the Uyghur Muslim minority in China.

Brussels is also worried about China's growing influence in some EU countries, including the former Yugoslav republics that Beijing has included in its "16+1" cooperation project that is part of its massive "Belt and Road Initiative". The controversial trillion dollar infrastructural investment scheme spans the Eurasian continent as well as parts of Africa.

The EU leaders' meeting coincides with a visit to Taipei by a delegation of the French Senate, headed by former defence minister Alain Richard. This comes at a time when Beijing - which views Taiwan as a renegade province - ramps up fighter jet incursions into Taiwanese airspace.

Meanwhile, Spain is to highlight more immediate concerns, calling for a bold EU answer on the sudden rise in energy prices, with France, Greece and Poland also seeking action.

The EU Commission is expected to offer short-term solutions to the energy crunch, with a more in-depth discussion by leaders at a summit on October 21-22.