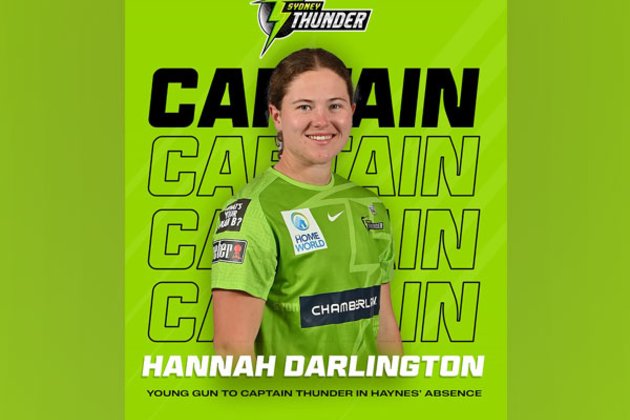 Darlington stands in for Rachael Haynes, who has decided to withdraw from the entire WBBL, post the birth of her son, Hugo. Darlington is the youngest captain in the competition's history.

Darlington, who was raised in Sydney's western suburbs, said she was honoured to captain the side she has followed since season one.

"I've been part of this club for nearly five years now and supported it all the way through, so to have the opportunity to step in for Rach is pretty special and I'm ready to lead a team that I'm really passionate about," Darlington said in a statement.

"Hannah is somebody who is passionate about the Thunder Nation, and she's shown leadership qualities over the last two seasons and was just a natural choice," he said.

"She's somebody that the team hold in high regard, and she goes out onto the field with real passion in her heart and lives and breathes our culture," Griffin added.

SYDNEY, NSW, Australia - Buyers swarmed Asian stock markets on Friday, cashing in on a global rush to stocks.Gains in ...

Many Amazon employees to be allowed to continue working from home

CUPERTINO, California: In a shift from its previous policy that employees would need to be in company offices at three ...

Indian port to ban cargo from Iran, Pakistan and Afghanistan

AHMEDABAD, India: In a bid to end drug smuggling, India's Adani Ports and Logistics, a subsidiary of the Adani Group, ...

China and Iran court Taliban, while IS aims for chaos

On October 8, a terrible blast struck the worshippers attending Friday noon prayers at the Gozar-e-Sayed Abad Mosque in the ...

BOSTON, Massachusetts: Massachusetts Governor Charlie Baker has announced that he is deploying up to 200 National Guard members to assist ...

ATHENS, Greece: The Greek island of Crete has been hit by a 6.3-magnitude earthquake, just weeks after another quake caused ...

Islamabad Court hears of horrific murder that has shocked the nation

ISLAMABAD, Pakistan - Zahir Jaffer, the son of a billionaire businessman and the prime suspect in Noor Mukadam's murder case, ...

NAYPYITAW, Myanmar - According to locals and sources within the armed resistance movement, the Myanmar military deployed thousands of troops ...

Meteor is suspected in explosion that rocked New England

MANCHESTER, New Hampshire: A meteor could have caused a loud explosion that was heard on Sunday in parts of southern ...