T20 WC: No issue with Warner's preparation, he is in great spirits, says Finch 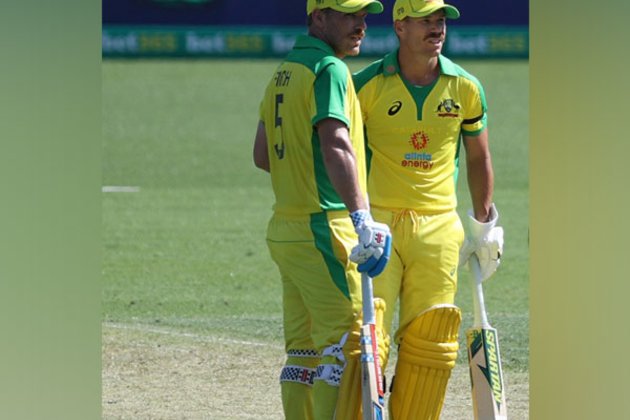 Dubai [UAE], October 14 (ANI): Left-handed batter David Warner might have been dropped from the playing XI of SunRisers Hyderabad, but Australia skipper Aaron Finch has rallied behind the maverick batter, saying he would be ready to go when the T20 World Cup comes around.

Warner was first removed as SunRisers Hyderabad skipper and then he was even omitted from the playing XI.

"I think over the years, we have seen when he (Warner) has got to bat against the world teams, he is a far better player. I have got no issues with the preparation that he has had. We have seen him in great spirits, he is coming here with a great attitude and he is organising things behind the scenes, he is doing everything that he loves to do. I have got no issues that come game, one he will be ready to go," Finch said during pre-tournament media interaction organised by ICC.

Finch also gave a positive update on his injury and he revealed that he would be available for the warm-up fixtures against India and New Zealand. Finch had undergone surgery earlier this year to repair cartilage in his right knee.

"Yeah, it is all good. I think it's nine weeks tomorrow, post-surgery, so everything has come along really well. It is probably a couple of weeks ahead of schedule. Originally it was probably touch and go to be available for the two warm-up games, but at the moment it is looking like there will be no problems, so looking forward to getting out and getting back into it," said Finch.

Australia will kickstart its T20 World Cup campaign against South Africa on October 23 at the Zayed Cricket Stadium in Abu Dhabi.

"We have got a group that has played a lot of T20, not a huge amount together, guys are at different stages of preparation and getting back to playing. It comes down to getting it done on the day. Every team can win any game, we know that in T20 cricket, there are match-winners right across the board, so we just have to turn up and get it done at the right time," said Finch. (ANI)