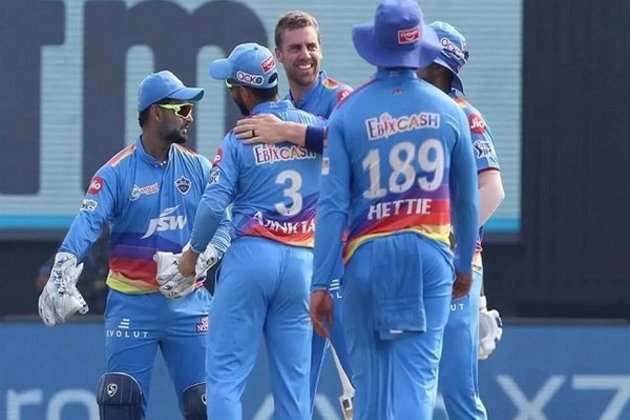 Melbourne [Australia], October 15 (ANI): Delhi Capitals pacer Anrich Nortje said he was "proud" to be a part of the set-up but expressed "disappointed" on not being able to clinch the Indian Premier League (IPL) 2021 trophy.

Delhi Capitals' IPL 2021 campaign ended with a hurtful defeat as Kolkata Knight Riders (KKR) got over the line courtesy Rahul Tripathi's six off Ashwin in the final over.

"In sport and in life, things move so rapidly. Can't believe how time went by with this amazing bunch. Proud of what we achieved and disappointed that we couldn't get the trophy. Thank you to everyone involved, especially the fans for sticking with us," Nortje tweeted.

West Indies star batter Shimron Hetmyer thanked Delhi Capitals for giving him the opportunity to represent the side in the IPL 2021.

"Thanks to @DelhiCapitals for supporting me and giving me the opportunity to represent you guys really enjoyed it," Hetmyer tweeted.

After the defeat, Delhi Capitals (DC) head coach Ricky Ponting said he would like to retain each and every player of his team for the IPL 2022.

"I would like to keep everyone, to be honest. We have got this terrific group of people at the Delhi Capitals. The playing staff and the coaches have done an amazing job for the last couple of seasons and I think our performances so to speak for themselves," said Ponting during the post-match press conference.

Ponting also said Delhi Capitals failed to utilise the powerplay and were eight to 10 runs short of the good first six overs score in the game. (ANI)

SAGAING, Myanmar - According to local sources, air attacks and shelling drove thousands of people from at least nine villages ...

Letter From an Unknown Woman