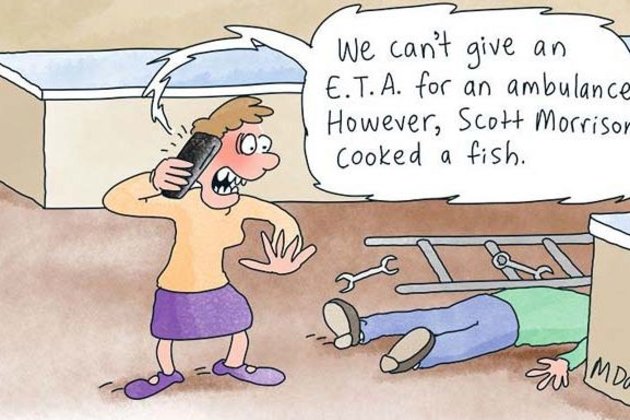 As the pandemic continues to wreak chaos, the blame lies not in the anti-lockdown crowd but in our government's return to form, writes Tom Tanuki.

HIDING AWAY at home, I look at the chaos caused by our abandonment of an effective pandemic response and my first tendency is to check in on the anti-lockdown movement. I want to ask them, any of them: "Well, how do you like it now? Are you happy? Is this your 'freedom'?" It's a force of habit, after spending nearly two years studying their conspiracist scene.

But then I remind myself of the futility of thinking this way. Because it's not really their fault, is it? For all their stupid costumes, rallies and stunts, they changed nothing. All of this is the Government's fault - and in causing this chaos, I believe, the Government is only returning to form.

Despite believing that, over my break I've been torturing myself watching different flavours of COVID-denialist. Specifically: Northern Rivers wellness influencers. Change is as a good as a holiday. (In my life, I simulate a spring clean by looking at different types of loser for a while.)

While many countries have offered free testing kits, the Liberal Government is determined to serve its own interests first.

I've been sharing the best (worst) of their alt-reality approach to the Omicron outbreak in my Instagram stories, sharing my pain and making my followers upset. I've found "shamans" who speak to COVID, thanking it for improving their skin's shine. I've seen it called a "cleanse" at least a dozen times. I've watched influencers encourage their unvaxxed followers to contract the virus "naturally" and that once you've had it, you "level up".

Basically, the novel coronavirus is being reframed by the wellness community as a Byron Bay health retreat.

Worse, they've been intentionally sharing the virus with each other at "community immunity" parties. I know they're happening in the Northern Rivers and reportedly around the Gold Coast, too. They're contracting it from each other, not isolating, and so spreading it around.

We all understand by now that even if we resent and fear it, this fantasy-land approach has become popular among Australians. But in 2022, our government has finally delivered these people their desired reality. Not just the wellness charlatans, but the entire cast of anti-lockdown organisers I've discussed in this column space throughout 2021.

They have what they asked for, right? That is: the freedom to visit their favourite shop and no real mandated responsibility to do anything for each other. There are restrictions and requirements, but it turns out they're all easy enough to avoid. This is their time!

The mainstream media has eschewed objectivity in favouring the Liberal Party's 'let it rip' pandemic strategy.

So I can't help but wondering if they find it a shame, or perhaps a mystery, that the outcome is much the same as during lockdowns. Instead of shops closed by government regulation, now that we have "freedom", they're closed because of rampant COVID illnesses. The toilet paper is still missing, but this time it's because of supply chain breakdowns. (And for that same reason, many other aisles are empty, too.)

And now, for good measure, you also cannot go to a hospital. If an unvaxxed Byron Bay influencer gets ill enough to require their buckling NSW healthcare system's services, they might not get them. They might be shoved behind a curtain to wait for up to 45 hours for a transfer to our failing COVID facilities.

But again, is any of that their fault?

Possibly a little, in a granular way. (I do think that if you need a ventilator, after shunning a life-saving vaccine and intentionally contracting COVID, you're a frivolous use of a ventilator.) But on the whole, a thousand grifting wellness shamans could not do in all their lifetimes the damage that the Australian Government has done to this nation in a month by abandoning responsible pandemic management. The entire anti-lockdown movement could not do this. They did nothing.

What did their movement really demand? Exactly this: a return to character for Australia.

The Federal Government's pandemic strategy has been a series of mistakes that could have easily been prevented.

The Australian Government - federally through generous doling out of pandemic relief measures in 2020 and at state level through years of responsible pandemic measures - was acting out of character. Slavoj Žižek termed these abrupt relief measures around the world, like Australia's temporary JobKeeper and increased JobSeeker, 'disaster communism'.

And that might be a bit of a stretch, but by God, did those measures save lives, businesses and communities. 'Everyone's a socialist in a crisis,' it's said. But they were temporary measures and now our government has remembered what we are.

The hordes of new "activists" I studied and commented on here in Independent Australia were savvy enough to detect an aberration in our early national approach to the pandemic. It just didn't feel like us to them.

A collective public health response? Community-minded mutual aid sensibility? Staying at home to lend a hand to some nurse you've never met? They did not get it, because those are not the rules under which we grew up. They had a lifetime to internalise the vicious, penny-pinching, border-protecting, Indigenous-bashing and economy-venerating mantra of Howard's era, itself only a reversion to the White Australia-era political playbook.

They internalised the rules of a country which locks asylum seekers up offshore for years and ignores them, overturns the land we live on for mining profits even as global warming threatens our quality of life, erodes our hard-won welfare network and education system and persists in underfunding public health systems - even as a pandemic looms. (Systems it evidently failed to reinforce, despite having nearly two years to do so during lockdowns.)

Government's COVID Christmas plan was capitalism at its worst

The Federal Government's plan to get people back out and spending over Christmas has worsened the COVID-19 crisis.

So while it looks like chaos is enveloping at the moment, I regard this moment more like a stretched rubber band snapping back into shape. "Nature is healing". The Government is back to telling the downtrodden and the marginalised to fuck off and fend for themselves, more or less like they always did.

I think that's what they had in mind when they were demanding "freedom".

I've been watching these Northern Rivers hippies, among other ostensibly ex-Left anti-lockdown types, run a line for the whole pandemic about how the Left "rolled over for big pharma and government". They'd pat themselves on the back like they were the only true rebels left. (And to be fair, some centre-Left types did sound a little nauseating about authority at times.)

Being isolated while desperately organising mutual aid measures and demanding collective public health measures from the top down never felt very thrilling. I'm sure that buying a cheap Anonymous mask to wear to some useless anti-lockdown spectacle must have been a real buzz.

But now the "rebels" have had their big demand realised and it turns out that it was just for the Government to act exactly like it always did. What a revolution. How counter-cultural.

So while I might continue to remark on the Australian political and activist fringe, we have to remember that that's just because I believe we want to know the minds of our neighbours. We want to understand how bad it can get among the people we next door to. But these fringe conspiracists and wellness hippies didn't manifest this change - the Government did.

So if we want to be safe from the novel coronavirus, our real enemies live in Canberra. And I'm told we get to vote them out this year.

Tom Tanuki is an online satirist, social justice commentator, writer and comedian. He has worked in anti-racist political comedy, most notably through his satirical group the Million Flag Patriots and anti-racist group Yelling At Racist Dogs (Y.A.R.D.). You can follow Tom on Twitter @tom_tanuki.