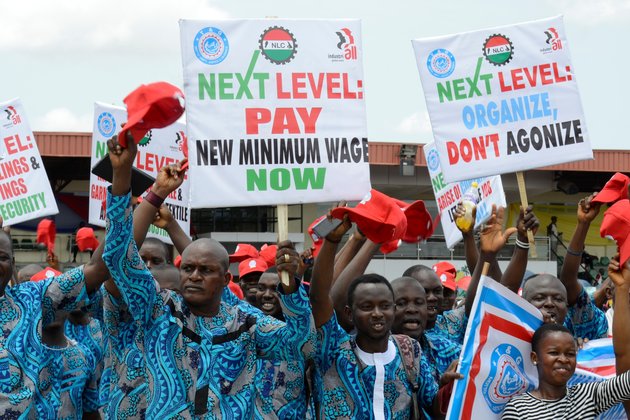 Imagine you live alone and walk into a local food market in Lagos, the Nigerian commercial capital, to buy a week's worth of basic food items. In less than 15 minutes, you would find that you've spent at least 10,000 Naira (or US$24 at the official exchange rate of US$1 = 416 Naira).

This may seem minuscule to privileged households but such expenditure is a heavy burden on Nigeria's 62 million workers.

After factoring in rent, transportation, medical expenses and electricity, among others, the average Nigerian worker can't make ends meet. This has been made worse by the rising cost of living. For most Nigerians, the cost of living is about 5.3 times more than the average salary.

Soaring food prices are the major cause. Nigeria's inflation rate was 15.9 percent in March, 2022, and food prices rose by 17.2 percent, among the highest in Africa.

Those prices have been increasing for several reasons, including insecurity in the country's food-producing areas, poor transportation and storage facilities, removal of some food items from the list of imports eligible for foreign exchange through the Central Bank of Nigeria's official windows, depreciation of the Naira, which led to increases in the prices of imported food, and border closures in 2019 that resulted in steep declines in food imports.

The war in Ukraine has added further upward pressure on commodity and fuel prices. This will cause overall inflation and food prices to continue to increase well into 2023, a pointer that Nigerian workers are in for a very rough ride during the next several months.

The rising cost of living has left Nigerian workers with a stark choice. They either spend much of their income on food and forgo other essential needs, or drastically cutting back on food expenditures in order to afford essential services. This Hobbesian choice is worse for a one-income household with multiple people, where the minimum monthly wage has to be spread across members of the household.

It's no wonder that Nigeria's number of poor people is forecast to rise 95 million or about half the population in 2022.

Many of these poor Nigerians, including those in vulnerable employment, would see their living standards deteriorate precipitously. That's because Nigerians spend the highest portion of their income on food. An average Nigerian household spends about 56% of income on food. The other three high spenders on food are Kenya (46.7%), Cameroon (45.6%), and Algeria (42.5%).

The more expensive food becomes, the poorer and more unhealthy Nigerians become. The fact that Nigerian workers have neither embarked on food riots, nor staged mass demonstrations to protest the unbearable increases in food prices, implies they must have found ways of coping with food inflation.

To maintain a decent level of food consumption and avoid becoming one of the 5 million Nigerians that face hunger, households are reducing expenditures on essential services like health, electricity, and transportation. It has become customary for households to switch off electricity at night to reduce energy bills. Many now postpone or avoid unessential travels.

Workers are also doing additional work. These include operating Uber and other share riding cabs and trading in assorted goods. They are also offering services such as barbering, hair braiding, fashion design, tailoring, event planning, photography, commission sales, digital marketing, and exploring opportunities on the web. Some workers are even cutting back on time spent on their regular jobs to devote more time to other income generating activities.

In their attempts to cope with food inflation and rising cost of living, some Nigerian workers have fallen prey to predatory lenders, or what are widely known as "loan sharks".

Cashing in on workers' desperation, these lenders charge exorbitant interest rates as high as 60 percent. Unable to repay their loans on time, many borrowers find themselves stuck with unsustainable debts.

Is there a role for government? Instead of the usual fanfares on May Day, government officials should focus on how to make food more affordable in Nigeria. A starting point is to learn how India successfully addressed its food shortages and rising food prices.

Food shortages were so severe in the 1950s and 1960s that India became known as the "begging-bowl" nation.

Today, India is not only self-sufficient in food, but food is widely affordable. It has become a net exporter of food.

It turned the situation around through the Green Revolution initiated by Prime Minister Jawaharlal Nehru in the early 1960s.

Land reform under the Green Revolution has enabled rural dwellers to have access to agricultural land, supported by government-provided irrigation systems, rainwater catchments, and extension officers.

India's land reform placed a ceiling of 25 acres on land ownership per household. Absentee landowners with surplus land were forced to relinquish portions of their land for redistribution to landless farmers.

Contrary to the myth that commercial agriculture is the panacea for Nigeria's food crisis, India's agriculture is dominated by small and medium farmers.

Perhaps the greatest boost to food production in India is the country's extremely cheap and extensive transportation network. Villages are connected to major towns, cities and markets through paved roads and rail systems.

State-owned buses are very pervasive and ply the most isolated regions of the country. Because of easy access to inexpensive transportation, farmers can bring their products to the open market daily.

It's been a win-win phenomenon for both farmers and workers. Farmers' incomes have been on the rise, while workers have benefited from lower food prices.

Higher rural incomes have spurred demand for manufactured goods, and in many cases has led to the location of factories in rural communities, hence generating employment opportunities for rural dwellers.

Small-scale farming is the solution

The Indian case has shown that the key to food security lies with small producers, as opposed to Nigeria's focus on large-scale agricultural projects that either produce cash crops or turn out to be white elephants.

To ease food supply constraints and ultimately reduce the cost of food in Nigeria, government should focus on boosting the productive capacities of small-scale farmers. This can be done by granting them access to arable land, providing credit for the purchase of inputs, facilitating access to markets, provision of irrigation and storage facilities, as well as safety nets that insulate them from exogenous shocks.