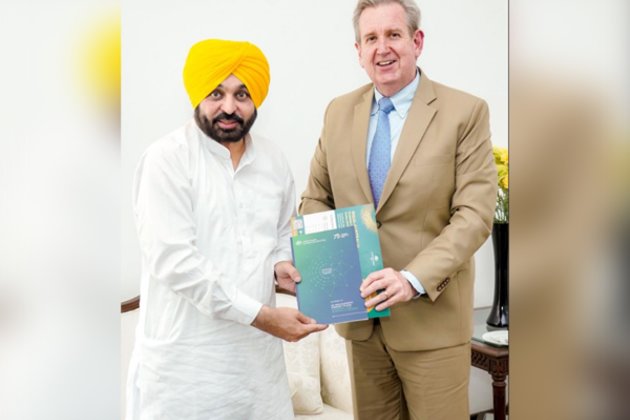 Chandigarh [India], May 4 (ANI): Australia's High Commissioner to India, Barry O'Farrell on Wednesday called on Punjab Chief Minister Bhagwant Mann and divulged his keen interest to forge collaboration, especially in the field of Agriculture and Skill Development with Punjab on the pattern of Gujarat and Maharashtra.

Responding to O'Farrell's proposal, Mann assured him of all cooperation and support in this regard so as to propel Punjab in the high growth trajectory by concretizing these plans of mutual interest.

In a bid to boost the bilateral trade, a three-member Australian delegation led by O'Farrell including Member of Parliament Gurmesh Singh and Second Secretary Political Jack Taylor called on the Chief Minister here at his official residence on Wednesday this afternoon.

O'Farrell apprised Mann of the India-Australia Economic Cooperation and Trade Agreement (IndAus ECTA). He said, "IndAus ECTA is India's first bilateral trade agreement with a large, developed economy in 10 years, which aims to double two-way trade."He also mentioned that Australia's goal is to lift India into their top three export markets by 2035 and make it 3rd largest outward investment destination in Asia.

O'Farrell further said that Punjab could be immensely benefitted by forging collaboration with Australia, especially in the field of agriculture and agro-industry as its progressive farmers have a proven track record of vast experience and expertise in food production.

Taking part in the deliberations, Bhagwant Mann said that Punjabis due to their enterprising and resilient nature have fairly contributed to the overall socio-economic development of all the major countries across the globe including Australia, New Zealand, Canada, UK, USA, Italy etc.

The chief minister said that Punjab has several franchises in the different parts of the world viz. "There is a big Punjab in Vancouver, Toronto, Sydney, Auckland besides a mini Punjab in the UK."The Chief Minister asked the visiting delegation to be in touch with his team of officers headed by his Additional Chief Secretary, A. Venu Prasad, who was also present in the meeting, to fructify these proposals of mutual interest between both sides on the ground.

O'Farrell expressed his gratitude to the CM and emphasized the much-needed synergy to boost bilateral ties for the promotion of trade and business with Punjab.

He assured Bhagwant Mann that their team would also proactively engage with Punjab to further strengthen their economic cooperation. (ANI)

The Trial of the Chicago 7

Trial of the Chicago 7