At least as easy with Albanese and nowhere near as sleazy 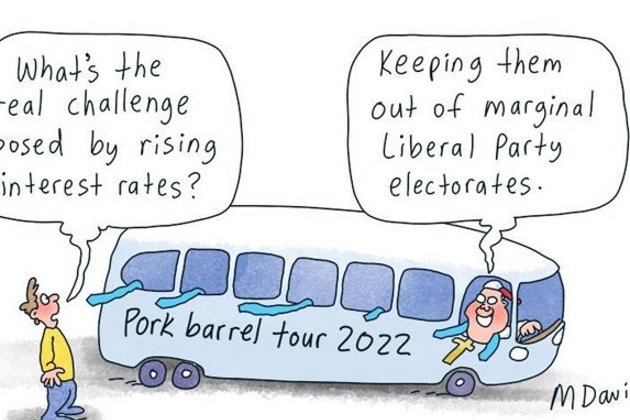 We are all, on average, about 3% poorer every year under the Morrison Government. Founder and publisher Dave Donovan debunks the "Coalition are better economic managers" theory.

AUSTRALIA'S MAINSTREAM MEDIA has been echoing the Government's line that the economy is in great shape.

Journalists have also been amplifying that tired old Howard-era furphy that the economy will always be better under the Coalition than Labor.

'It won't be easy under Albanese' is the new slogan. Last election, they had Shorten is 'The Bill Australia can't afford'. And the mainline media are dutifully trying to catch Albanese out with gotcha questions, each more irrelevant than the last.

In fact, the economy is in terrible shape and getting worse by the day. Sure, ask Anthony Albanese about what the RBA cash rate is - something Scott Morrison also got wrong, by the way - but why not also ask questions about details that matter? As a former banker, I can assure you, the RBA cash rate is largely ignored by the banks.

PLEASE NOTE the following information is brought to you via Twitter sewers and various public records.

What about asking Morrison what the inflation rate is? That is something much more important to the lives of most Australians.

The CPI usually ticks along at between around 2 and 3% per year. When Scott Morrison took Malcolm Turnbull's job in September 2018, it was in fact just 1.7%.

It is skyrocketing under this Government.

Wage growth is usually better than inflation, meaning people are, on average becoming better off as their money is buying more. It usually runs at between 2.5% to 4.5%, and that was certainly the case under the previous Labor governments of Rudd and Gillard.

Under the Coalition, in power since 2013, wage growth has been stagnant and trending down. It now sits at 2.3%.

Not for people like Morrison or the CEOs, though. Corporate profits are booming and our Prime Minister is among the five best-paid leaders in the world.

What it means for the average person - people like you and me - is that we are all, on average, about 3% poorer every year under this Government.

Which adds a sense of irony to the Coalition's 'won't be easy under Albanese' pitch. The real value of our money is diminishing by 3% every year under the Coalition, wages are stagnant and more and more people are in insecure jobs all the time.

Housing prices are absurd. The unemployment rate is apparently low, but what about underemployment? Perhaps Scott Morrison could be asked why the Australian Bureau of Statistics records people as employed when they only work one hour a week? Ask him what the rate of underemployment is in our nation.

And so instead we hear Albanese get asked about the dot points on page 47 of the ALP policy manifesto. And hear weeks of commentary from hair products attached to bodies about Albanese's "gaffe".

What to do about Australia's weak and subverted Fourth Estate? I have some ideas, which seemed to strike a chord with people when I wrote about them on Twitter over the weekend. You can read more here.

I'd say the best thing we could do is vote this Government out on 21 May. Because perhaps things won't be easy under Albanese, but they couldn't possibly be as diabolically bad as they are under Scott Morrison, the greasy.

And they certainly won't be as sleazy.