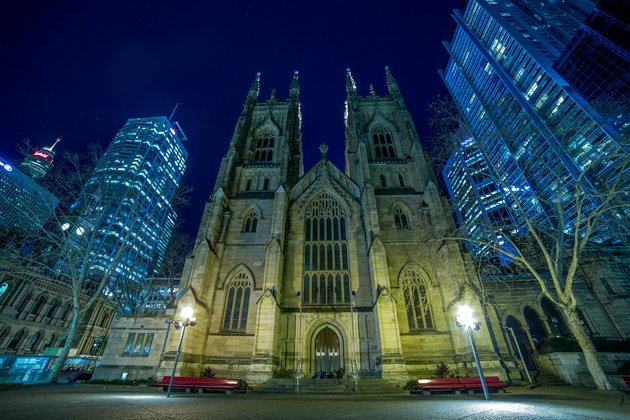 When same-sex marriage was legislated by the Commonwealth in 2017, it quickly became a potential flashpoint in the Anglican Church of Australia.

For the conservative Diocese of Sydney, which contributed $1 million to the "no" campaign in the national same-sex marriage plebiscite, it became the line in the sand that could open up a major rift in the national church.

This week was the first opportunity for the diocese to prosecute its anti same-sex marriage agenda nationally, after COVID stopped the scheduled 2020-21 meetings of the triennial General Synod.

The national church now stands on the brink of that rift, with General Synod - the church's "federal parliament" - this week refusing to endorse the Sydney position against same-sex marriage.

Sydney Diocese holds that the Bible sanctions marriage between a man and a woman only, and that this traditional position is a central doctrine of the Anglican Church.

What will happen next is up in the air. As an Anglican layperson who was a member of General Synod for 30 years, and as a reporter for the UK weekly newspaper Church Times, I have been following the General Synod meeting via live stream.

The Sydney contingent at the synod is clearly unhappy. The Sydney archbishop, Kanishka Raffel, told the synod the church was "in a perilous position, and no one should be mistaken about that".

The issue of same-sex marriage was, he said, a "tipping point", adding that "we ought to stop wasting each other's time by gathering this way and supporting these structures".

However, given Sydney Diocese's huge representation on the synod following a couple of decades of what is often referred to as "branch stacking" within church circles, most observers do not expect that to happen.

The results of the elections to the standing committee of the General Synod, held yesterday, reveal the conservatives are now in almost complete control of the national church.

Progressive Anglican clergy and laity from around the country who had long been members of the committee have been cast aside. From here on, the national church's central structures will prosecute a virtual carbon copy of Sydney's conservative position on same-sex marriage and other issues as well.

Same-sex marriage is not the first flashpoint within the church. Most of the other 22 dioceses are celebrating 30 years since women were first ordained priests. Women clergy are now a quarter of the total number, and there are also seven women bishops across five dioceses. One diocese, Perth, has a woman archbishop, Kay Goldsworthy.

Women clergy and bishops are not only not ordained in Sydney Diocese, they are not even recognised there. In Sydney Diocese, where women are not permitted to lead in either the church or the home, Goldsworthy would not be recognised as a priest, let alone an archbishop.

During the ordination of women debates in the 1980s and '90s, there were threats of schism. They came to nothing. Instead, Sydney Diocese has systematically taken over the national church by increasing its representation on the General Synod through a loophole in its constitution. Now it holds a third of the clergy and laity members, as well as members from other dioceses where it has been planting like-minded churches and clergy.

That is why conservatives have now taken over the standing committee, and why they gained large majorities among the clergy and lay members for their move at General Synod against same-sex marriage.

It was the diocesan bishops who thwarted the move. A little more than half of the diocesan bishops could still be identified as progressives. In direct contrast to the Sydney position, they see the blessing of same-sex marriages as a means of offering acceptance and God's grace to same-sex people in loving, committed relationships.

Moves are afoot in the General Synod as it approaches its conclusion on Friday to call on the progressive bishops to "repent" of their "sinful" position. Those moves might well be successful, but they won't affect the decision made in what might well be the progressives' last stand in the national Anglican church.

However, all is not lost for the progressive position. The General Synod is a limited federal structure that gives the individual dioceses great autonomy. Until now, the progressive dioceses have held back on same-sex marriage blessings to maintain national church unity.

Only two public blessings of same-sex marriages have occurred since the church's highest court, the Appellate Tribunal, ruled in 2020 that these services were acceptable in terms of the church constitution. It's hardly been a tsunami, as the bishop of Ballarat, Garry Weatherill, told this week's General Synod.

Now that real unity is clearly a dead letter, some dioceses will perhaps step out confidently to embrace same-sex blessings and other progressive causes, just as they embraced women clergy 30 years ago. The Anglican Church of Australia might present many different faces in the future.