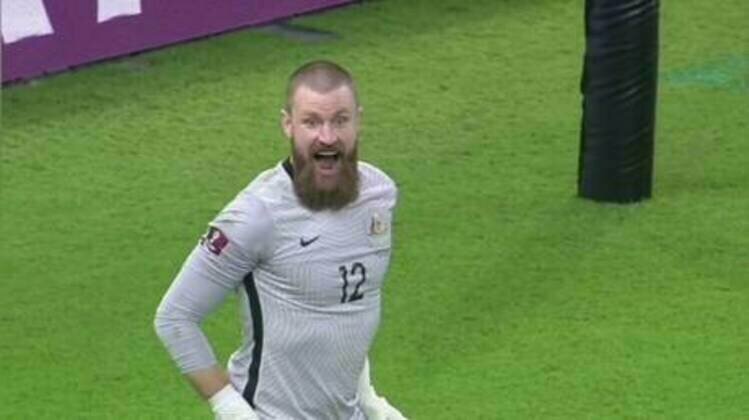 Australia booked their spot at the 2022 FIFA World Cup in Qatar after goalkeeper Andrew Redmayne's unorthodox penalty shootout antics proved the difference as his team claimed a dramatic victory against Peru in their intercontinental playoff.

With the score locked at 0-0 and approaching the end of extra-time in the meeting in Doha, Australia manager Graham Arnold introduced shootout specialist Redmayne for starting goalkeeper Mat Ryan in anticipation that the substitution could make all the difference as penalties loomed.

That ultimately proved the case when the shootout went to sudden death after both nations scored four of their first five efforts.

Awer Mabil netted his spot-kick for the Aussies, piling the pressure on Peru's Alex Valera to keep his nation's hopes alive.

But Redmayne had other ideas, deploying his tactic of dancing along the goalline with a variety of moves in a bid to put Valera off.

When the forward did step up, Redmayne was equal to his effort, diving low to his right to keep out the shot and sparking wild celebrations among the Socceroos players and staff.

The win hands Australia the penultimate spot still available for the 2022 World Cup before it kicks off in November. It also means Australia will be competing in a fifth straight edition of the FIFA showpiece when they line up in a group alongside France, Denmark and Tunisia.

Redmayne, who plays his club football for Sydney FC in the Australian A-League, was very much the hero for his homeland after Arnold made the brave call to introduce him in the 120th minute with penalties imminent.

The 33-year-old, who came close to quitting the game to become a barista five years ago, was modest in victory and suggested that even his teammates had been none the wiser about his late arrival for spot-kicks.

"The boys ran out 120 minutes, and it not only takes 11 on the field but the boys on the bench, the boys in the stands. The boys that missed out in their squad as well. It is a team effort, team game, so I can't take any more credit than any of the others.

"I'm no hero. I just played my role like everyone else did tonight. Not even the 11 on the pitch, it was much more than that, it is a team effort," said Redmayne, who has been given the nickname 'the pink/grey Wiggle' for his goalline dancing antics, depending on the jersey color he's wearing.

"They [Peru] would have prepared all week thinking Maty was going to be in goals," Redmayne added.

"To put me on would have thrown them a little bit. I spoke to a couple of players in our cohort and they said it would have rattled them having a different goalkeeper come on."

Socceroos boss Arnold also confirmed that starting goalkeeper Ryan was unaware of the ploy until his number came up for him to depart the pitch after playing his part with a clean sheet across the preceding 120 minutes.

Australia were forced to enter the playoffs after a disappointing qualifying campaign in the Asian Football Conference saw them finish third in their group, behind automatic qualifiers Saudi Arabia and Japan.

Arnold's men navigated a playoff against the UAE last week before seeing off Peru.

The agony for the South Americans means that Peru fail to follow up on their appearance at the Russia 2018 World Cup, where their fans illuminated the event as some of the most exuberant to attend the tournament. Prior to that, the last World Cup appearance for Peru had come back in 1982.

The last of the 32 places available at Qatar 2022 will be determined in Doha on Tuesday when New Zealand meet Costa Rica.