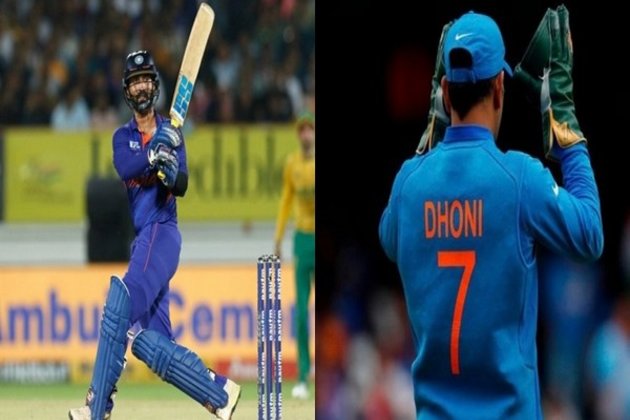 The 37-year-old Indian batter on Friday scored his first half-century in the shortest format of the game for India. Karthik put on a show in Rajkot against South Africa in the 4th T20I of the five-match series as Men in Blue levelled the series 2-2. He smashed 55 off merely 27 deliveries.

At 81/4 after 12.5 overs, India had their backs against the wall and Dinesh Karthik and Hardik Pandya had a massive task on their hands.

Their stand of 65 off only 33 deliveries injected some much-needed momentum in what was a meek effort till that point. Pandya scored 46 off only 31 before being dismissed by Ngidi, with Shamsi taking a brilliant catch. Dinesh Karthik would continue in the same vein despite losing his partner, bringing up his maiden T20I fifty.

He would immediately walk back afterwards, attempting a big slog-sweep against Dwaine Pretorius, but it was a job well done in a knock of 55. India managed to score 73 runs in their last five overs, ending up with a highly competitive score of 169/6, largely due to the efforts of the pair. In reply, India bundled the Proteas to merely 87.

After India's 82-run victory, the series has now been perfectly set up for a scintillating finale in Bengaluru. South Africa were brilliant in the first two matches but the hosts have fought back with great gusto to level up the scores.

The fifth and final clash will be played at the M. Chinnaswamy Stadium on June 19, with a winner being hard to predict. With the T20 World Cup not far away, a pressure cooker situation though will be the perfect preparation for both the sides heading into Australia. (ANI)