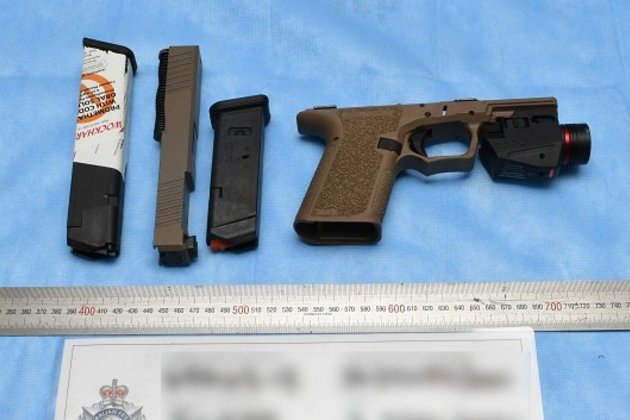 A Yangoona man was yesterday (30 June 2022) charged by the AFP with multiple offences relating to the alleged importation of firearms and drugs.

The investigation began on 13 October 2021, when Australian Border Force (ABF) officers at the Sydney Gateway Facility examined a consignment from the US addressed to a parcel collection site in Western Sydney.

A fully operational Glock-style pistol was found concealed with a gaming console.

Further investigations into the matter by the AFP identified the man, 20, as the alleged coordinator of the importation, and linked him to the attempted importation of 500 grams cannabis on 7 August 2021 and seven grams cocaine on 26 September 2021.

Detective Sergeant Matthew Veraguth said keeping illicit firearms off the streets is a priority for police because of the dangers they pose in the hands of criminals.

"Thanks to the collaborative efforts by AFP and our partners, we have been able to protect our community from the far-reaching consequences that may have occurred if the gun had made its way to the offender," Det-Sgt Veraguth said.

"The AFP will continue to work with our law enforcement partners across the country to identify illegal importations and stop them from reaching the hands of dangerous criminals."

ABF Commander of Trade and Travel Operations East Sue Drennan said that her team continues to remain vigilant of illegal firearm imports to ensure criminal actors do not get the opportunity to endanger citizens.

"The ABF works tirelessly to protect the community by targeting the illicit firearms trade with advanced analytical techniques and technology," said Commander Drennan.

"We also continue to work closely with our partner agencies to disrupt criminal syndicates seeking to infiltrate supply chains looking to import illegal firearms and firearm parts into Australia."

The man was charged with the following offences:

SYDNEY, NSW, Australia - Stocks in China were flat to lower on Tuesday as investors weighed up the disappointing economic ...

LONDON, England: Reports from the UK's opposition Labour Party said its leader, KeirStarmer, will call for a freeze on energy ...