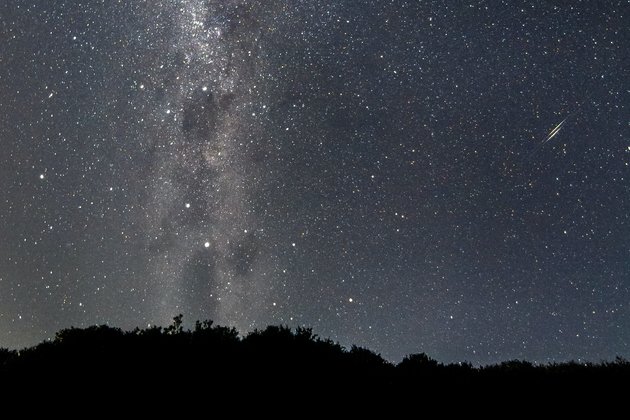 Looking for something spectacular to brighten a cold, dark winter's night?

Well, this weekend might just have something in store: not one, not two, but three meteor showers active at the same time - combining to provide a celestial firework display almost all through the night.

Although the best night to watch will be the evening and night of Saturday July 30 (through to dawn on Sunday morning), the three showers will be near their peak rates from tonight. So you'll have plenty of chances to catch the show while avoiding bad weather or other commitments.

Best of all, there's going to be a New Moon, which means there won't be much glare spoiling the show.

Not one meteor shower, but three?

The Solar System is full of debris left behind from the formation of the planets more than 4.5 billion years ago. Some of this debris - comets and asteroids - moves on orbits that cross Earth's path around the Sun.

Each time those comets and asteroids swing in towards the Sun, they shed debris. Over hundreds or thousands of years their orbits become shrouded in broad streams of dust.

Earth continually passes through these streams of detritus as it moves around the Sun, which gives birth to the annual meteor showers. Each year, we return to the same place in our orbit, encounter the same stream of debris, and get another nice show as that debris burns up harmlessly, 80 kilometres overhead.

In the depths of the Australian winter, Earth is moving through a bit of space where three streams of debris intersect with our planet's orbit. Those three streams give birth to the stars of this weekend's show: the Southern Delta Aquariids, the Alpha Capricornids, and the Piscis Austrinids.

The International Meteor Organisation has 3D animated visualisations of the Southern Delta Aquariid and the Alpha Capricornid meteor streams, which show how the debris is distributed across space.

A tale of three showers

So, let's introduce the stars of the show.

The Southern Delta Aquariids is the most active of the three showers, with the fastest-moving meteors. Most of the meteors you'll see this weekend will likely be members of this stream.

The origin of the Southern Delta Aquariids is the topic of some debate. They are one of several meteor showers seemingly linked to one parent object, as though a large comet fell apart long ago, leaving behind a vast amount of debris, potentially including fragments large enough to be comets in their own right.

Over millennia, the debris has spread out, so Earth runs into it multiple times each year. At the moment, the Southern Delta Aquariids are tentatively tied to a comet called 96P/Machholtz, which is the most active object in the debris stream.

The Southern Delta Aquariids have been known to throw up some surprises. In 2006, they produced an outburst, with some people observing more than 60 meteors per hour at their peak. No outburst is forecast for this year, but you never know what might happen!

The second of our triumvirate of showers is the Alpha Capricornids. These produce the slowest meteors of the three showers. They also have a reputation for being a "fireball" shower - often producing spectacular meteors that outshine the brightest stars.

These are the meteors you're most likely to catch on film, and provide a great opportunity to practise astrophotography.

The final shower, the Piscis Austrinids, are perhaps the least studied of the three. Like the Alpha Capricornids, they are a minor shower that yields just a few meteors per hour, even at their peak. Their meteors are of medium speed.

Read more: I've always wondered: why are the stars, planets and moons round, when comets and asteroids aren't?

So where, and when, should I look?

The key for observers is to work out when the shower's "radiant" will be above the horizon. The radiant is the point in the sky from which all the meteors in the shower appear to radiate.

In the case of our midwinter trio, we're quite lucky. All three radiants rise in the early-to-mid evening from Australia, and reach a reasonable altitude by about 10pm.

As a result, you'll be able to see meteors any time from the mid-evening onward. The best rates will be visible from about 10pm, until dawn.

Once you're settled into a comfortable spot from which to observe, try to avoid looking at your phone. You'll want to let your eyes properly adjust to the darkness so you can see the faintest meteors. Glancing at a screen, even for a second, will send you back to square one.

We find the best place to look when watching a meteor shower is around 45 degrees above the horizon, and about 45 degrees to the left or the right of the radiant.

In the early evening, it would therefore be best to look to the east or northeast. By midnight, and immediately after, looking to the north would be best. And in the hours before dawn, you should look west or northwest.

And don't fret once it's over! While these three showers are shaping up to put on a decent show, they aren't the best meteoric event of the year. That's the Geminids, coming up in December. So there's much to look forward to yet!

Read more: Fragments of a dying comet might put on a spectacular show next week - or pass by without a trace