Total Fandemonium: VELO Shares The Love For McLaren Formula 1 Team Fans On- And Off- The Track 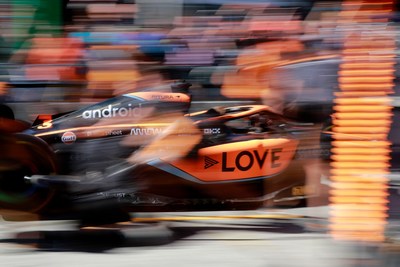 The fan-focused design will feature the word 'LOVE' on both sidepods made up of names and messages from fans of The McLaren F1 Team around the world, placing them at the heart of elite motorsport - on the car as it races around the track. Driven by racing legends Daniel Ricciardo and Lando Norris, the bespoke 'LOVE' lettering will debut in a country known for its culture of love - The Netherlands - at the FORMULA 1 HEINEKEN DUTCH GRAND PRIX 2022, where the host country's orange 'fan-army' meet McLaren's papaya 'fan-army' for a brightly-coloured race weekend.

Selected through a global competition which pulled in 2,700 entries, the 'LOVE' lettering includes the names and messages of 95 fans from multiple countries, ethnicities, and backgrounds, highlighting the growing diversity of motorsport fans. Messages from the fans include "Viva La Papaya" from Andrew. The launch is part of VELO's new campaign, LOVE THE UNEXPECTED, which is all about celebrating motorsport fans and their unexpected stories. Tapping into the constantly changing face of motorsport fandom, VELO and The McLaren F1 Team are championing the love and passion fans have for the sport on a global scale. The series will uncover the untold tales of fans of The McLaren F1 Team and their exciting stories, delighting them with new ways to experience the sport.

John Beasley, Group Head of Brand Building, BAT, comments: "We wanted to do something different and unexpected that celebrated our love for the fans whose passion and energy fuels the sport. With the support of our partnership with The McLaren F1 Team, we've offered fans a unique opportunity to see their name race around the track in front of the global motorsport fanbase. This is just one example of VELO's passion to deliver unexpected experiences for fans, and we want to continue to celebrate those that make the sport what it is today. By uncovering their passion and drive for motorsports and the ways in which they celebrate it, our fan-focused videos showcase the exceptional world of motorsport fans and their captivating stories of love for the sport."

Lou McEwen, Executive Director, Brand & Creative, The McLaren F1 Team, comments: "Fans are at the heart of every sport, but motorsport fandom is like no other. Through the partnership with VELO, we have placed fans firmly on the focal point of motorsport, the car, and have championed their captivating stories with our fan-focused videos. The bespoke 'LOVE' lettering is the first time that fans and their messages have been featured on the car and we are proud to celebrate some of McLaren's greatest supporters."

Launching from 22nd September, VELO and The McLaren F1 Team's Love the Unexpected content series will begin to release the fan stories - from the weird to the wonderful - highlighting the love these fans have for the sport that is driving the new face of elite motorsport culture. The fans include:

To discover more about the fan stories head over to the Instagram pages of VELO and The McLaren F1 Team.

BAT is a leading, multi-category consumer goods business with a purpose to build A Better Tomorrow by reducing the health impact of its business through offering a greater choice of enjoyable and less risky products for adult consumers.

The company continues to be clear that combustible cigarettes pose serious health risks, and the only way to avoid these risks is not to start or to quit. BAT encourages those who would otherwise continue to smoke to switch completely to scientifically-substantiated, reduced-risk alternatives*. In order to deliver this, BAT is transforming into a truly consumer-centric multi-category consumer products business.

BAT's ambition is to have 50 million consumers of its non-combustible products by 2030 and to generate Pound 5billion of New Categories revenue by 2025. BAT has set stretching ESG targets including achieving carbon neutrality for Scopes 1 & 2 by 2030 and eliminating unnecessary single-use plastic and making all plastic packaging reusable, recyclable or compostable by 2025.

BAT employs over 52,000 people and operates in over 175 countries. The BAT Group generated revenue of Pound 12.87 billion in the first half of 2022 and profit from operations of Pound 3.68 billion.

The company's Strategic Portfolio is made up of its global cigarette brands and a growing range of reduced-risk* New Category tobacco and nicotine products and traditional non-combustible tobacco products. These include vapour, tobacco heating products, modern oral products including tobacco-free nicotine pouches, as well as traditional oral products such as snus and moist snuff. In the first half of 2022, we had 20.4 million consumers of our non-combustible products, a rise of 2.1 million on full year 2021.

*Based on the weight of evidence and assuming a complete switch from cigarette smoking. These products are not risk free and are addictive.

Our products as sold in the US, including Vuse, Velo, Grizzly, Kodiak, and Camel Snus, are subject to Food and Drug Administration (FDA) regulation and no reduced-risk claims will be made as to these products without FDA clearance.

McLaren Racing was founded by New Zealand racing driver Bruce McLaren in 1963. The team entered its first Formula 1 race in 1966, since then McLaren has won 20 Formula 1 world championships, more than 180 Formula 1 grands prix, the Indianapolis 500 three times, and the Le Mans 24 Hours at its first attempt.

McLaren was the first F1 team to be awarded the Carbon Trust Standard in 2010 and has retained it since on a bi-annual basis, most recently in February 2021. The team was also the first in F1 to be given the FIA Sustainability Accreditation Award at a three-star level in 2013 as part of the FIA Environmental Certification framework, before becoming a signatory to the UN Sports for Climate Action Commitment in 2021.

NEW YORK, New York - Stocks were choppy on global markets Tuesday as investors struggled with a slew of bad ...

After end to Covid aid, Canada has $4.67 billion budget surplus

OTTAWA: Canada's finance ministry has said that partly due to higher tax revenues and the end of COVID-19-related benefits, the ...

SYDNEY, NSW, Australia - Stocks in Asia were mostly stronger on Tuesday after the heightened volatility of the previous day.Markets, ...

ISLAMABAD, Pakistan - Prime Minister Shehbaz Sharif has stated that Pakistan may need to import over a million tonnes of ...

OTTAWA, Canada: Canada has appointed Jennifer May as its first female ambassador to China, taking over a role that has ...

WASHINGTON D.C.: In the past three weeks, the latest campaign to offer a second Covid booster shot has seen 4.4 ...

MOSCOW, Russia: Employees at Russian airlines and airports have begun receiving army draft orders, as reported this week by the ...

School children gunned down by ex-student at school in Russia

MOSCOW, Russia - At least fifteen people, including 11 pupils, have been killed in a mass shooting at a school ...

LUCKNOW, India: Thirty-six people, including 12 struck by lightning, have been killed in northern India over the past 24 hours, ...

LONDON, England: The non-profit organization Presidium Network has announced that five British prisoners of war captured in Ukraine have been ...

News of the World