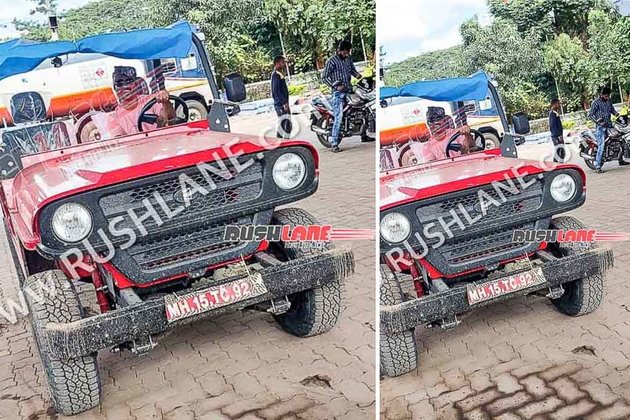 When you think of a Mahindra, what comes to your mind? A slightly over designed SUV that promises a safe and sound drive with decent performance on tap. In India, Scorpio N is the talk of the town followed by XUV700 and Thar in terms of sheer demand.

The main set of woes that Mahindra is hit with, in India, are semiconductor shortages accounting for lowered production capacity. But most Indians aren't apt with the fact that Mahindra has expansion models set in place across global markets. One such market is North America. Mahindra assembles an off-roader in Detroit and is targeted at Canada and USA.

That off-roader is Roxor. And is on the brink of getting permanently banned in North America due to litigations raised by Stellantis (former FCA). Thanks to automotive enthusiast Ganesh Pagar, Roxor is now found testing on Indian roads. Let's take a look.

Roxor has been controversial ever since its inception. Mahindra off-roaders and Jeep-inspired designs go hand-in-hand, don't they? Mahindra has been pulling this off in India for decades because it was licensed to assemble Jeep vehicles in India for a long time. The company can draw inspiration from its legacy here in India.

However, Mahindra tried to pull the same thing in North America. I mean, North America, Europe, and Australia have been Jeep's backyard for a long time. Hence FCA sued Mahindra regarding this which resulted in something called "Post-2020 Roxor" which got the green flag from the court. The same Post-2020 Roxor is what is spotted on Indian roads too.

Let's leave the Mahindra & Mahindra Ltd v. FCA US LLC, 6th US Circuit Court of Appeals, No. 21-2605 case behind us because that saga is expected to go on for a long time. 2022 Roxor is extremely bare bones. It still gets a few retro Jeep charms like round headlight, hood design, hood latches and some more. It doesn't get a roof, but gets a roll bar for occupant protection. Heck, it doesn't even get fenders as it was one of the design elements borrowed from Jeep.

Under the hood, Roxor is no stranger to Indians as it is basically a previous-gen Thar. It is produced in India and is exported as knocked-down parts to Detroit where it is assembled. It is based on a ladder-frame chassis and is powered by the same 2.5L engine that powered old Thar.

This engine makes 62 bhp of power at 3,200 RPM and 195 Nm of torque at 1,400 RPM. It is mated to a 5-speed manual. Also on offer is a 4X4 with a low-range transfer case gearbox. You might be thinking that this engine might be too slow for Americans that are apt with fast cars. But in the USA, Roxor is not road legal and is sold as an off-road kit car.

With Jimny in the picture, Mahindra is looking at offering a lifestyle off-roader at a lower price point in India. Thar prices currently start from Rs. 13.53 lakh and go till Rs. 16.28 lakh (prices ex-sh). Jimny is likely to be priced much lower than that. For enthusiasts that just want a diesel off-roader for the weekend getaway, a bare-bones Roxor at sub Rs. 10 lakh prices doesn't seem like a bad choice, does it?