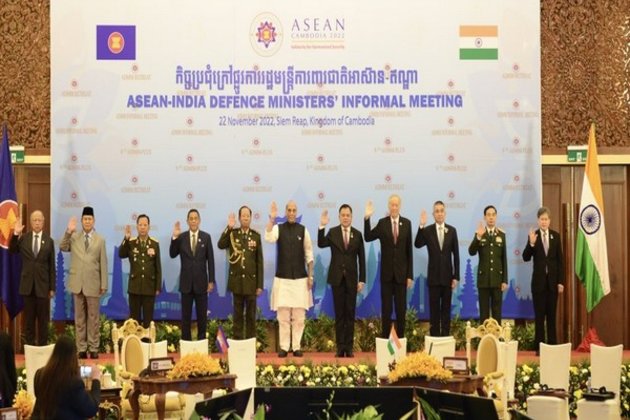 Siem Reap [Cambodia], November 22 (ANI): Union Defence Minister, who is in Cambodia to attend the ASEAN Defence Ministers Meet (ADMM) Plus, said on Tuesday that India is committed to the implementation of various initiatives to offer its capacities and experience for strengthening India-ASEAN defence relations.

"India is committed to the implementation of various initiatives and continues to offer its capacities and experience for strengthening the India-ASEAN defence relations," the defence minister tweeted.

Singh is on an official visit to Cambodia on November 22-23 at the invitation of the Deputy Prime Minister and Defence Minister of Cambodia Samdech Pichey Sena TEA Banh. Cambodia, as the current chair of ASEAN, is hosting the (ADMM Plus) meeting this year.

Notably, the maiden India-ASEAN Defence Ministers Meeting was held today at Siem Reap, Cambodia to commemorate the 30th Anniversary of India-ASEAN relations in 2022, which has also been designated as 'ASEAN-India Friendship Year'.

India and ASEAN have a longstanding, strong, and comprehensive strategic partnership. India places a high priority on its interaction with ASEAN multilateral platforms like ADMM-Plus and the East Asia Summit.

India became the dialogue partner of ASEAN in 1992 and the inaugural ADMM-Plus was convened in Hanoi, Vietnam on October 12, 2010.

Since 2017, the ADMM-Plus Ministers have been meeting annually to further the dialogue and cooperation between ASEAN and the Plus countries. India and ASEAN elevated their relationship to a 'Comprehensive Strategic Partnership' in November 2022.

Taking to his official Twitter handle, Rajnath Singh said, "Insightful deliberations with Australia's Deputy Prime Minister and Minister for Defence, Mr. @RichardMarlesMP on boosting defence ties and deepening cooperation between IndiaAustralia in Siem Reap, Cambodia today."Sharing details regarding his meeting with Rajnath Singh, Richard Marles in a tweet said that they discussed shared ambitions for future cooperation between the two nations and reviewed the growth of the defence partnership in 2022.

Richard Marles tweeted, "Great to see @rajnathsingh today to reflect on the significant growth of our defence partnership in 2022 and discuss our shared ambitions for future cooperation. Australia and India are great friends and we share an interest in an open, prosperous and secure Indo-Pacific." (ANI)