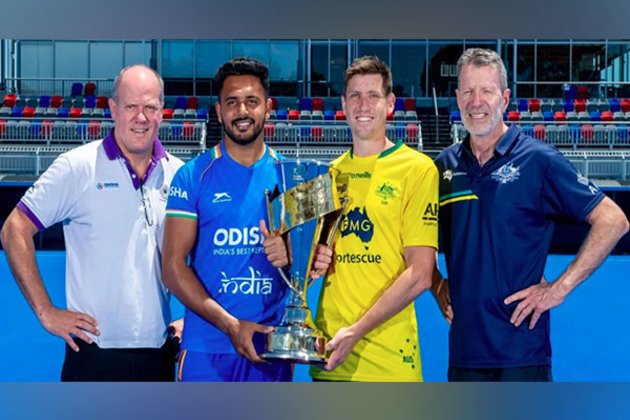 Adelaide [Australia], November 26 (ANI): The first game of the 2022 Test series between India and Australia saw the hosts edging past the visitors 5-4 in a thrilling match on Saturday at the Mate Stadium in Adelaide.

Akashdeep Singh scored a hat-trick (9', 26', and 58') and captain Harmanpreet Singh scored a goal (30') to tie the score at 4-4, but Blake Govers' late penalty corner won the match for the Aussie team.

It was the first time the two sides had faced off since Australia's 7-0 thrashing of India in the Commonwealth Games 2022 hockey final in Birmingham earlier this year.

India got off to a sluggish start in the Test match and ended up falling behind. Just four minutes into the game, Tom Craig's excellent 3D abilities set up Sharp Lachlan to score the first goal for the Kookaburras.

However, India, who are ranked fifth, reacted to the occasion admirably and scored the equaliser five minutes later via Akashdeep Singh.

High up the field, Akashdeep took control of the ball and passed it to Dilpreet, who then pounced on his pass to score the equaliser.

World number one Australia scored early once more in the second period, but the Indian hockey team fought their way back to tie the score.

Both teams had everything to play for in the second half as the score remained tied at 2-2 after halftime.

In contrast to the first and second quarters, the third quarter started with the visitors being the early aggressors. India finally gained the lead for the first time in the game through captain Harmanpreet Singh, who converted from a penalty corner after repeatedly troubling the Australian defence.

A few minutes later, Harmanpreet was presented with a comparable chance to increase his team's lead, but this time his low shot lacked the force to get past the Australian goalie.

Early in the fourth quarter, the Australians had a few golden chances to take the lead but missed their shots from two consecutive penalty corners. On the other hand, the Indian hockey team tried to maintain a tight defence and attack the opponents from behind.

With less than three minutes remaining, the Australians took a 4-3 lead thanks to a thundering Blake Govers penalty corner.

But the advantage only persisted for a minute. The ever-present Akashdeep was once more located in the Australian circle by Germanpreet Singh's long pass from the right. The forward shimmied and smacked one in from a narrow-angle to complete his hat trick.

However, the game still held one more significant twist. When the timer reached zero, Australia was awarded a penalty corner, but the Indian defence blocked it, costing Australia another PC. The second one backfired on Graham Reid's team, as Blake Govers beat Krishna Pathak with a shot to give the hosts the exciting victory.

The second Test between Australia and India is on Sunday. December 4 marks the end of the five-game series. (ANI)