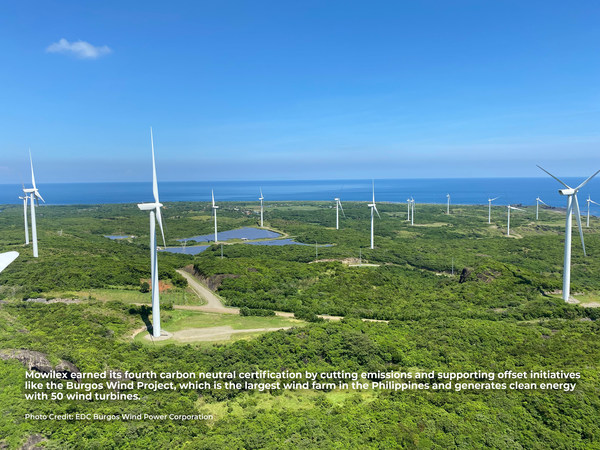 Mowilex earned its fourth carbon neutral certification by cutting emissions and supporting offset initiatives like the Burgos Wind Project, which is the largest wind farm in the Philippines.

Mowilex earned certification by recording significant carbon reductions and offsets over a 12-month period. Onetime events, including a return to the office and the restart of post-pandemic business travel, slightly raised the company's carbon totals from the previous year. Mowilex also operated in multiple facilities while moving to an energy efficient new Cikande factory that will eventually reduce the company's carbon footprint by up to 7%. Residual emissions are offset via carbon credits.

Last month, Mowilex installed a solar canopy that is expected to permanently reduce carbon emissions at the company's headquarters by up to 30%. The panels shade cars while producing the maximum solar output allowed by current state electric company regulations.

"Our fourth consecutive CarbonNeutral company certification from Climate Impact Partners demonstrates Mowilex's commitment to the environment and society. As an ethical company, we know the hidden costs of pollution outweigh the challenges and costs of doing the right thing," says Niko Safavi, CEO of PT Mowilex Indonesia.

"Mowilex's fourth year of carbon neutral company certification demonstrates their continued leadership in the sustainability space, as they are dedicated each year to negating their carbon footprint with offset projects that benefit the environment," says Dave Jonas, SCS Global Services' Manager, Climate Services.

Visit the Mowilex website for product and sustainability information.

PT Mowilex Indonesia (Mowilex), a subsidiary of Asia Coatings Enterprises, Pte. Ltd., is a leading producer of premium paints and coatings. Since launching the first Indonesian-made, water-based paints in 1970, the company has expanded its commitment to environmental ethics, equality, community and innovation. PT Mowilex is Indonesia's only certified carbon neutral manufacturer, producing zero and low VOC paints in modern colours, and the company regularly wins awards for its corporate social responsibility and sustainability efforts.

US concerned over rights at Mexico auto factory, seeks corrections

WASHINGTON D.C.: The US has again asked Mexico to investigate claims that workers at an auto parts facility of American ...

WASHINGTON D.C.: Tesla confirmed this week that the US Justice Department has requested documents related to its Full Self-Driving and ...

TOKYO, Japan: Toyota has announced that it sold 10.5 million vehicles in 2022, maintaining its position as the world's top-selling ...

Concerns about recession in Germany after economy shrinks in Q4

FRANKFURT, Germany: Data released this week showed that the German economy unexpectedly shrank in the fourth quarter of 2022, indicating ...

Nearly a year in, the war in Ukraine has cost tens of thousands of lives and brought the world to ...

After Biden tapped US oil reserves, House passes bill to end such uses

WASHINGTON D.C.: The US House of Representatives has passed a bill that limits the ability of US Energy Secretary Jennifer ...

BOSTON, Massachusetts: Russian businessman Vladislav Klyushin, who has ties to the Kremlin, has been accused of making tens of millions ...

TOKYO, Japan: In light of a tense security environment following Russia's invasion of Ukraine and Moscow's growing military cooperation with ...

DALLAS, Texas: Oil and gas pipeline operators are preparing to stockpile equipment following severe weather forecasts for the next few ...

TikTok CEO to appear before US Congress to discuss security concerns

WASHINGTON D.C.: As US lawmakers investigate the Chinese-owned video-sharing app TikTok, its Chief Executive, Shou Zi Chew, has confirmed that ...